Tony and the tiger

The cartoonist Tony Husband may be well known for his love of the tortoise, but he also has plenty of time for a much-loved and endangered animal: the tiger. Tony has got together with a poet and a musician to organise a charity gig in aid of the wild tiger. Known as the Roar Collective, […]

Cartoon © Tony Husband The BBC Magazine website has an interview with cartoonist Tony Husband, in which he talks about his drawings celebrating the humble village hall. The cartoons are the fruit of his ongoing tour with performance poet Ian McMillan, which we covered here on Bloghorn last September. 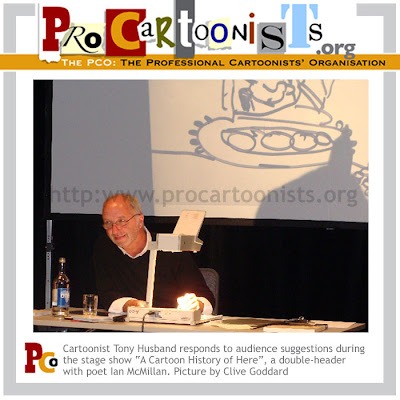 PCOer Clive Goddard on a unique cartooning event It’s not every day you hear of a comedy double-act show featuring a poet and a cartoonist. I recently got a ticket for such an event at the Cornerstone Theatre, Didcot. The cartoonist in question was Tony Husband, whose work I’ve admired for years, and the poet […]