Glenn Marshall writes: I’m easily influenced by all sorts of things around me, as Tomi Ungerer said ‘I’ve always been a sponge, just absorbing whatever I see, whether it’s in daily life or in art’, and Ungerer, who sadly died last week, was particularly inspiring and influencial to me. I love his varied, playful and boundary-pushing […]

PCOer The Surreal McCoy reports on John Jensen’s illustrated talk on the workings of cartoonist Rowland Emett‘s imagination at the Cartoon Museum in London last night. Admitting he was ‘genetically propelled to enjoy Emett’s work’ John showed what an accomplished technician Emett had been with drawings of trains and planes (he had worked as a […] 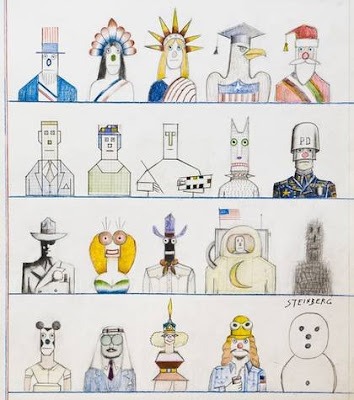 Twenty Americans by Saul Steinberg, from Illuminations An exhibition entitled Saul Steinberg: Illuminations is at the Dulwich Picture Gallery in London from November 26 until February 15. It features a retrospective collection of more than 100 works by the Romanian-born American cartoonist whose work was a major part of the New Yorker magazine for six […]