Following on from Bloghorn’s earlier post that mentioned Scott McCloud‘s concept of the Infinite Canvas, it has transpired that Microsoft has released a working demo of a piece of software called (imaginatively enough) Infinite Canvas that allows the cartoonist to tell a story in a way that is unencumbered by the traditional boundaries of the […]

Comic artist and author Scott McCloud (previously mentioned here on Bloghorn) has written widely about the theory and practice of comics and their creation his series of books Understanding Comics, Reinventing Comics and the more recent Making Comics. In this recent video post on Ted.com Scott talks about subjects covered in these books, including how […]

Getting your message across using cartoons 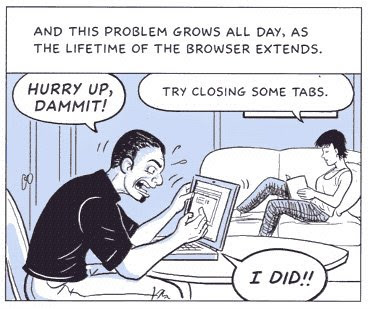 The IT giant Google is clearly aware of the power of cartoons in putting across information in an accessible way. The company hired cartoonist Scott McCloud to produce a 38-page comic book to promote its new Chrome web browser. You can see the comic online here: Google Chrome. While we’re on the subject of cartoons […]