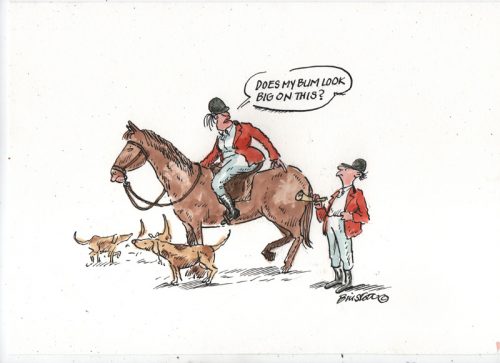 PCO Chair Bill Stott has the hunting set in his sights:

Some time ago, an American dentist travelled all the way from the U.S.A. to Africa. In his luggage was a large, very powerful rifle and a crossbow. He’d brought these things to kill stuff with – something Americans are quite good at doing at home, let alone abroad. Anyway, this dental jerk managed to lure, shoot and kill a much-loved local lion, for which he received general ignominy, death threats and for a time his life was very difficult. Which is as it should be.

Some Americans are big on hunting. They like killing wild animals. Why? Well they’d tell you that man is a natural hunter. They’d tell you that its entirely natural for them to pit themselves[armed with a Winchester 30/30] against brown bears, lions, deer and anything furry which isn’t human. Which is, in the words of the anti-hunting supremo Dr Agricola Monkfish [not his real name], bollocks. They do it because they like killing things.

So – that’s the Americans sorted. But what about closer to home ? What about in yer own backyard/garden/paddock/nearby field ? I live in what might be called a semi-rural area. “Semi” because if I look that way all I can see are fields, copses , cows, sheep and farms. If I look the other way I can see the by-pass and a big smelly factory which makes God knows what and, at night, looks like Mordor. But if you can ignore that, the rural side is pretty damned good. We get all manner of birds, from noisy gangs of starlings and sparrows, to crows, woodpeckers, loads of finches, and big circling buzzards. And we have rabbits and badgers too.

Oh, and foxes. We have quite a few foxes.

I’ve got two hens. One’s a huge fat Orpington. The other’s a smaller, more intelligent Barnvelder [go on –look them up]. Sure, they lay eggs – hens tend to do that – but they’re more like pets really, and they live in a large hen-run, protected by 7 foot pheasant wire. Sometimes, I let them out for a mooch round the garden where they fight over worms, look down Wellingtons, and eat flowers they shouldn’t eat. But, despite protective measures, my hens are at risk. From foxes. Foxes are agile, nimble and very intelligent. They’ve killed quite a few hens in the village. How would I feel if a fox killed Polly and Phoebe ? Sad. I’d feel sad. But would I want to kill the fox ? No, I wouldn’t.

And that sets me apart from a certain local group of would – be killers – our equivalent of psychopathic American dentists. I speak of course of the Local Hunt.

Officially, fox-hunting’s banned at the moment, but cunning Local Hunts get round the ban by simply ignoring it. Presently Local Hunts are allowed to career around the place with dogs chasing a smelly lure, but many still chase real live foxes.

Local Hunts are composed of men and women who are equestrian. They like riding horses. Not very well, many of them, but most of all they like galloping willy-nilly around the countryside behind a pack of dogs which will, given a chance, tear an exhausted, terrified fox to pieces, starting usually at the lower abdomen.

One hell of a death.

There’s collateral damage too. A passing hunt frightens paddocked horses, grazing cows and sheep, and anything else which might be fazed by half a ton of galloping horse and fat-arsed rider bearing down on them. AND they bung up our already narrow lanes with their Range Rovers, trailers and horseboxes .

So, despite the ban, foxes are still hunted by people who think that dressing up in silly clothes, blowing horns [yes, they actually do that] and generally disturbing the peace is all part and parcel of being rural and green and loving the countryside. [Bollocks – Dr Monkfish]

In fact, most Local Hunts are rubbish at killing foxes. Foxes are a lot cleverer than local huntspersons and their would-be killer dogs. But that’s not the point. INTENT is the point. And soon, providing Mrs May wins the election, these repellent people will be legally entitled to kill foxes again. The ban will be lifted.

Why will Mrs May lift the fox-hunting ban ? Well, she’ll do that because the hooray Henrys and Henriettas who “ride to hounds” are Conservative voters, and the PM wants to smash all opposition with a huge majority on her way to becoming the new Iron Lady. So what do a few foxes matter ? Not at all, apparently. They’re only animals after all.