Martin Honeysett spent two years in Japan teaching cartoon drawing at a university. He talks about his experiences here. 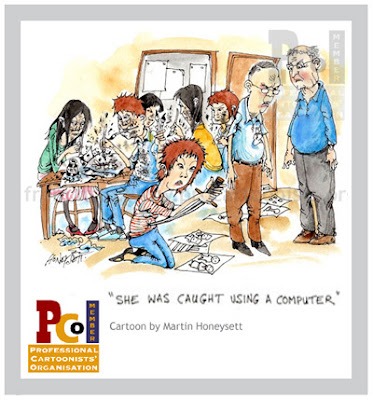 These were some of the many thoughts that buzzed round my head prior to and during the long flight to Kyoto, Japan, in late March 2005. I was due to become the first visiting professor at the Kyoto Seika University Cartoon Faculty. I was excited and somewhat nervous, not really knowing what to expect or what was expected of me.

I first visited Japan 20 years ago as one of a group of English and French cartoonists. A sort of cultural exchange organised by James Taylor, a publisher and cartoon enthusiast who’d managed to squeeze some funding from the Japan Foundation. The English element apart from James Taylor, consisted of Bill Tidy, Clive Collins, Roy Raymonde, Michael Ffolkes and myself.

The French contingent included Avoine, Bridenne, Nicoulard and Mose, the patriach of French cartooning, It was a great trip, two weeks of non-stop meetings, sightseeing and entertainment supplemented with warm and generous Japanese hospitality. Most of the time was spent in Tokyo but we also spent a few days in historic Kyoto, once the Capital. Professor Yasuo Yoshitomo who inaugurated and runs the cartoon department at Seika had invited us there.

The English contingent at least, was somewhat sceptical about the idea of a university teaching how to draw cartoons. I remember Bill Tidy, forthright as ever, standing up during a question and answer session holding a sheet of paper. “What you should do,” he said, “Is write down all the theories and teaching about cartooning and then …” He crumpled the paper into a ball and tossed it to the floor. Fortunately perhaps, the Japanese staff and students, looking on in bafflement, had no idea what he was on about.

I always hoped that I might return at some stage but thought less and less about it as the time passed. I heard later that Mose and Roy Raymond were regularly invited out for the bi-annual exhibition and I kept in contact by entering works for it and winning the occasional award. 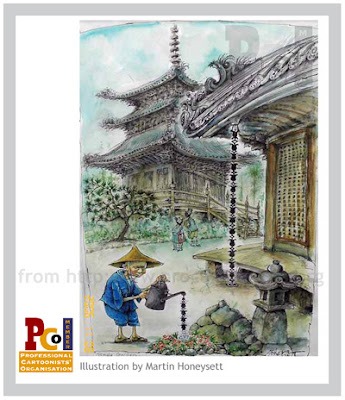 Then in 2002, out of the blue, I received an invitation to visit Kyoto for the exhibition. Not for the first time I was stepping into dead man’s shoes, for sadly, Mose had died.

I flew out with Roy and we joined another two cartoonists. Ponnappa from India and Pere from Spain. It was during this trip that I was asked if I would be interested in the idea of being a visiting professor. I said I was very interested but was cautioned that this was a tentative enquiry and in that Japan these things take some time to be decided.

So I returned home trying not to be too excited, looking forward to some sort of confirmation to arrive. It never did, so after a while I thought they’d given up on the idea . Then, two years later, I was again invited out for the exhibition and again asked if I’d be interested. I replied in the affirmative and this time it was confirmed.

For more, see issue 31 of The Foghorn.

From the PCO (Professional Cartoonists’ Organisation)
PrevPreviousHello to the National Portrait Gallery!
NextArtist of the Month: Lee HealeyNext