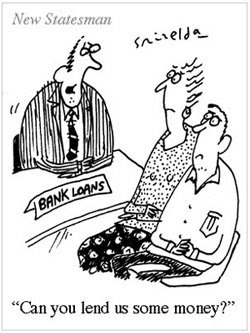 The Cartoon Art Trust Awards were presented last night at The Mall Galleries in London. The trust, which runs the Cartoon Museum in London, has presented the awards annually since 1995. Gag cartoonist Grizelda, left, was among the winners.

PCOer and Private Eye regular Will “Wilbur” Dawbarn was there and sent Bloghorn this personal report:

I was fortunate enough to be invited to join the Private Eye table this year, and what a star-studded occasion it seemed to this small-town boy! I even got my suit out of mothballs for the occasion.

After a brief time spent standing around with no-one to talk to, trying to earwig Ken Clarke’s conversation (for cartoon research purposes of course), scoffing as many canapés as I could get my hands on, and examining some marvellous Giles originals, I soon fell in with the coterie of Eye cartoonists, particularly the garrulous Simon Pearsall (“First Drafts”), who chatted non-stop in my left ear (most entertainingly) during the meal, leaving me only dimly aware of cartoons being auctioned off for thousands of pounds and awards being dished out to the worthy.

In my right ear at the table was Mark Warren, the writer of the Celeb strip. It turns out it’s only Charles Peattie who does both Alex and Celeb – I’d always assumed it was the same writer-artist combo doing both.

I missed a few more awards whilst outside having a fag with Simon P. and Martin Rowson (who was very charming and gracious to the winner of the Under 18 Young Cartoonist of the Year award, telling her to email him for advice and the like – though he bluntly refused me the same courtesy when I enquired …)

Joke cartoon award: Grizelda of the New Statesman and others

Pocket cartoon award: Jeremy Banks aka “Banx” of the FT

Young cartoonists of the year: Emilia Franklin (under 18) and James Hood (under 30).

The Pont prize for drawing the British Character: Charles Peattie and Russell Taylor of the Daily Telegraph for Alex. The Pont Award was set up five years ago in memory of Graham “Pont” Laidler, whose drew the brilliant series The British Character in Punch in the 1930s and 40s.

Lifetime achievement award: Raymond Briggs. The creator of the acclaimed books The Snowman and When the Wind Blows was responsible for some of the earliest British “graphic novels” – long before the term or the form was generally known. Previous winners of the award have included, Ronald Searle, Gerald Scarfe, Fluck and Law, and Trog.

PCOer Morten Morland has a first person report here as does Christian Adams of the Telegraph has his take on the events here too and Down the Tubes also has a round up.