The cartoonist and the twits

Well, I tried. Caved in to peer pressure and signed up to Twitter. Did the same with Facebook years ago. Finally managed to un-Facebook myself a while back. At least, I think I did. You can never tell with these things. Joining’s easy. Leaving’s a lot more complicated. A bit like marriage.

So I’m not about to find out how to LEAVE Twitter. I’m just not going to tweet and watch it wither on the vine. Better still, I’m not even going to watch it. Yes, yes, I know that this might be dangerous and that when the revolution explodes I’ll be the only one in our street wondering whose tanks are rolling across next door’s lawn and why my hair is on fire. 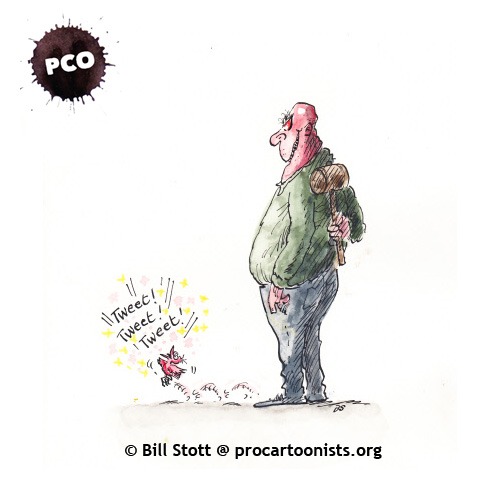 No Facebook? No Twitter? How can this be? Am I a monk of austere order? Am I a berk with nothing to say? No, and most of the latter appear to be on Facebook or Twitter anyway. And austere monks? I have no idea what they do with their thumbs.

Let me explain: I have a mobile phone, a humble little grey thing – almost a collector’s item now. Only three people know my number. Why have I got it? It’s in case my car breaks down or some other emergency. What it’s NOT for is “chat”. I do not check it every five minutes to see if anybody’s tried to tell me something underwhelming. I do not feel the need to blunder through shopping malls, head down, thumbs blurring, texting somebody about being in a shopping mall.

And so it was with Twitter. I did actually tweet three or four times. Admittedly, the first one was to say that I thought Twitter was crap and what a pain it was going to be – checking to see if anybody had tweeted back. They didn’t. People like me are beyond the social-network pale. We (I really hope there are others out there) hate the idea of being instantly accessible. We are irritated by tweeters who call themselves “Red Necco” or “Juli”. Its JulIE, OK? Not Judi, or Nikki, or Debbi. And its “gossip”, not “goss”, right?

Come the day my PC can accurately classify incoming tweets as Important, Moderately Important, Mildly Interesting or Vapid, I might take part again (the world will be relieved to know). Until then I shall remain mildly interested in the extreme level of banality achieved in 140 characters.

I like emails. They’re like writing letters. Remember them? When you had to actually WRITE? When you used at least three digits to hold the pen, and a whole handful more to keep the paper from sliding about? OK, my emailing’s of the one finger variety, but I’m not limited to the silly 140-character tweet rule. I can rant on and on, despite knowing full well that the recipient will immediately identify the sender, think, “Oh, its him!” and press “DELETE”

Tea and sympathy or well-meaning advice can be offered to Bill here. You can follow the rest of us, should you be so minded, here.