The old maxim that all good things come to an end has become true for the Shrewsbury International Cartoon Festival. The sad and untimely loss of two key organisers just prior to the pandemic, Covid putting it’s oar in to disrupt planning for three years, floods adding to financial difficulties for local sponsors, and the lack of sufficient local movers and shakers has caused the Festival to accept defeat and pull down the shutters.

Following on from two exploratory cartoon festivals in the town in 2002 and 2003, the Cartoon Festival  was a fun ride for 19 years, providing a whole host of wonderful memories and laughter on the way both for public and the many Cartoonists involved over those years. 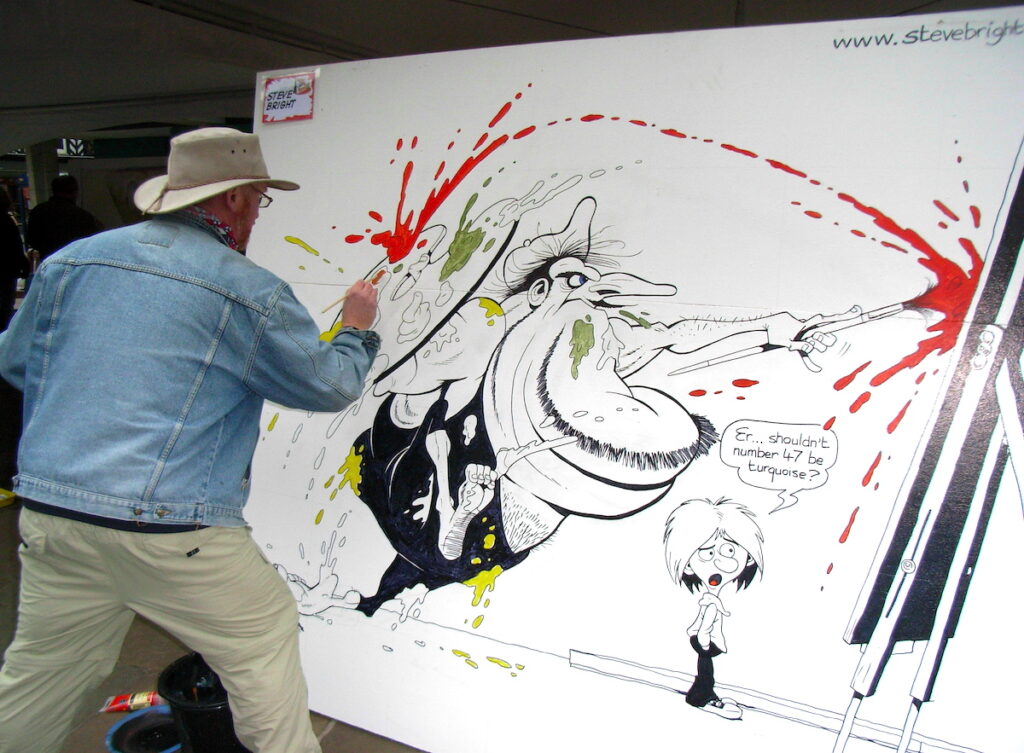 Steve ‘Brighty’ Bright in action at his ‘Big Board’, 2008. Photo © Roger Penwill 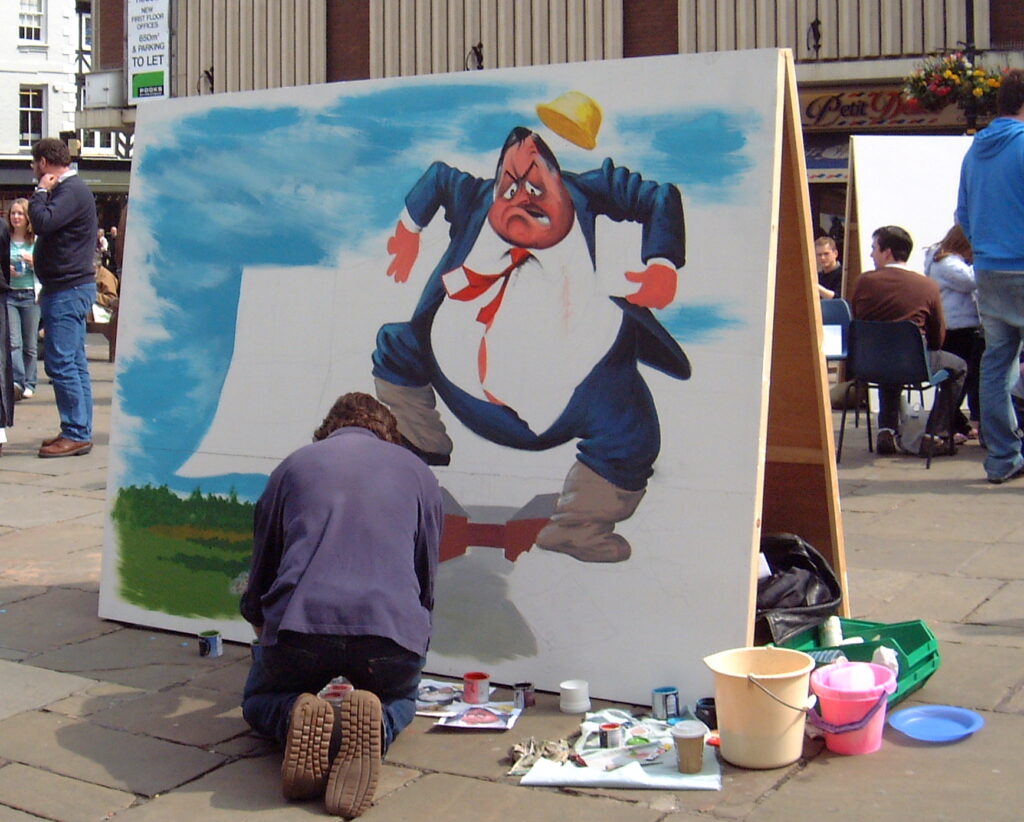 The festival explored ways of showcasing gag cartooning, rather than just relying on the UK’s excellent caricaturists to provide live drawing for the public, which led to the “Big Board” cartoon concept.  The Melodrawma, which ran for several years, saw a team of 4 cartoonists frantically create a large strip cartoon in twenty minutes to a live commentary and live melodic accompaniment.  Members of the public obligingly stuck their heads through a hole in a board to allow new bodies to be drawn around them – reverse caricaturing.  Humurals – cartoons drawn on walls – featured for many festivals.  Cartoon busking entertained the queues for caricatures. 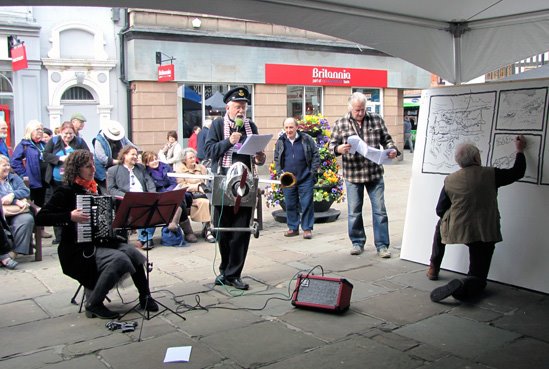 A ‘Melodrawma’ in 2012, staring The Surreal McCoy, Roger Penwill, Bill Stott and the much missed Noel Ford. Photo ©Roger Penwill. 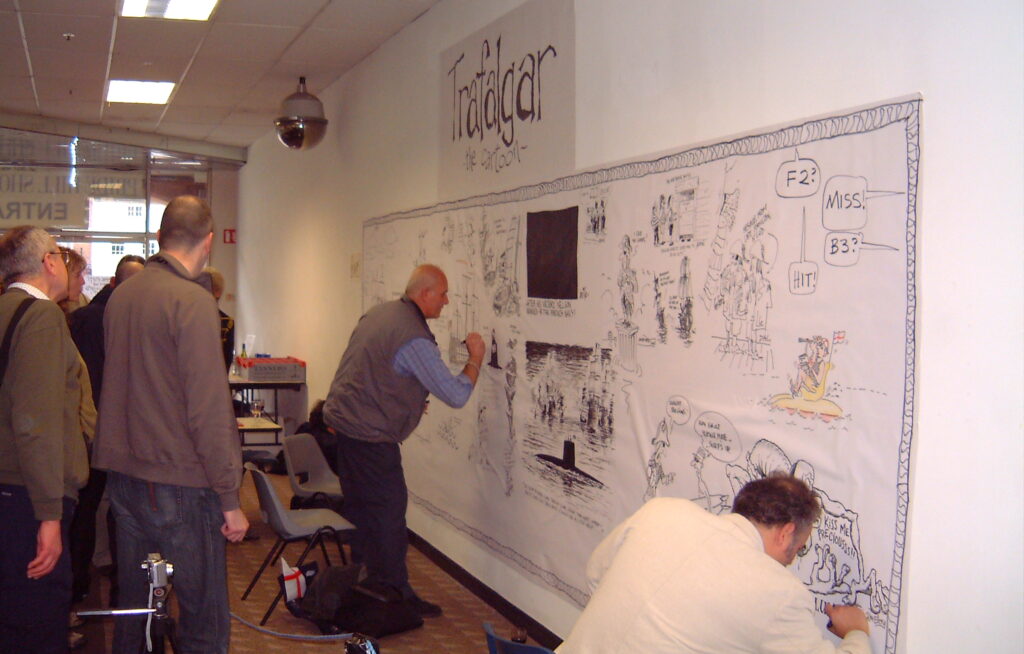 Many overseas cartoonists and their cartoons made the way to Shropshire, coming from France, Germany, Switzerland, the US, Turkey, Belgium, Australia, the Netherlands, Czech Republic (and nearly Greece,  but an exploding volcano stopped their flight). Dozens of UK and overseas cartoon exhibitions held in the Bear Steps Gallery and other venues in the town. A couple of exhibitions were made into books, a number of cartoons were sold each year and countless tablecloths were decorated. 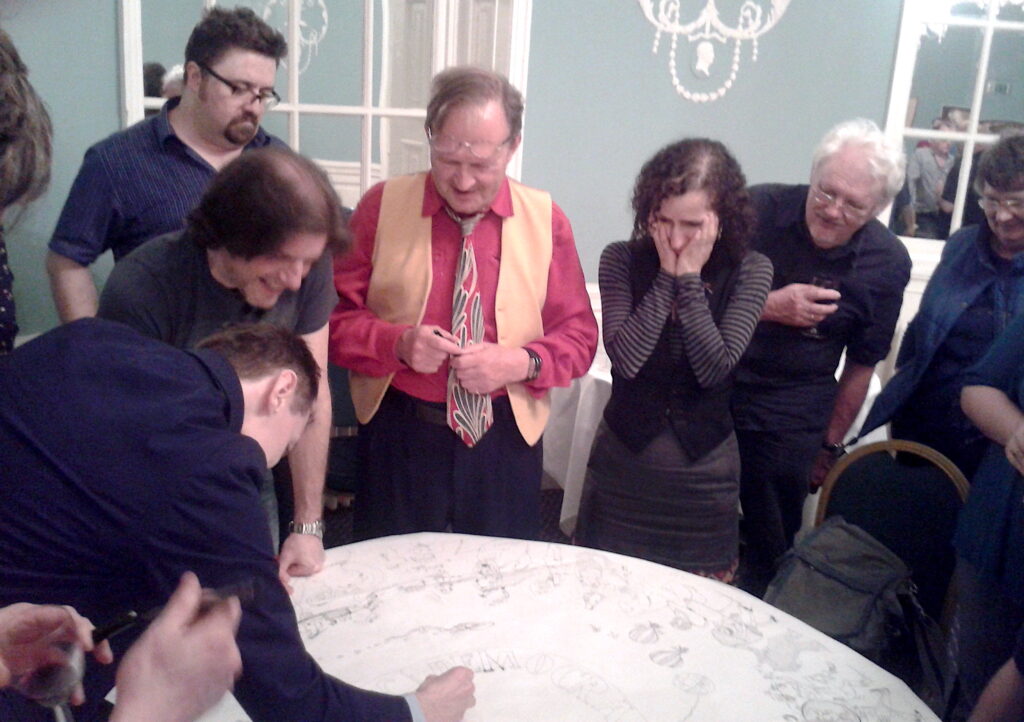 It was also the fertile ground for the discussions that led to the birth of the Professional Cartoonists Organisation.

Thanks to the very many people that supported the festival as participants and/or contributors, the organising team that changed many personnel over the years, the local authorities (which also changed a lot over the years), the folks that took the helm for various periods, workshop leaders, talk givers, our sponsors, patrons, venues, volunteers, helpers, photographers, street musicians, The Lion Hotel and the people of Shrewsbury and beyond. 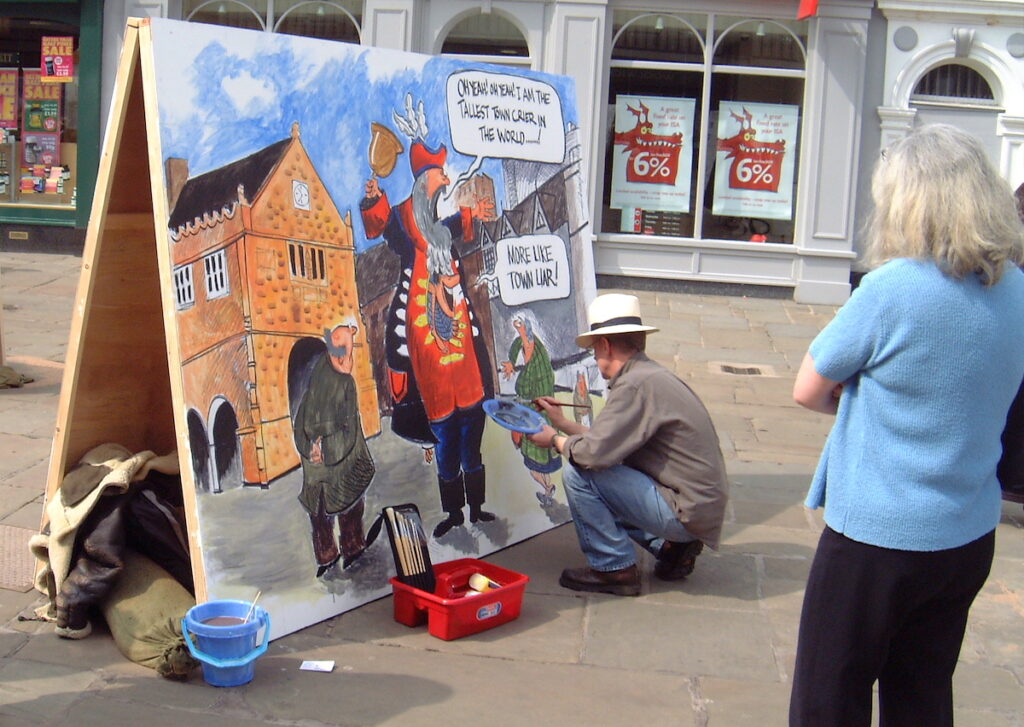 John Roberts having a break from caricature duty in 2006. Photo © Roger Penwill.

Everyone’s help has been special.  However I must acknowledge the trio who started the festival with me: John Roberts, who gave the caricaturist’s view on things; Karen Lloyd, who brought in the Bear Steps Gallery; and Alison Patrick, the Tourism Officer of Shrewsbury who persuaded the local council to make the leap of faith to support such an event.  Without that team there would never have been a Shrewsbury Cartoon Festival. 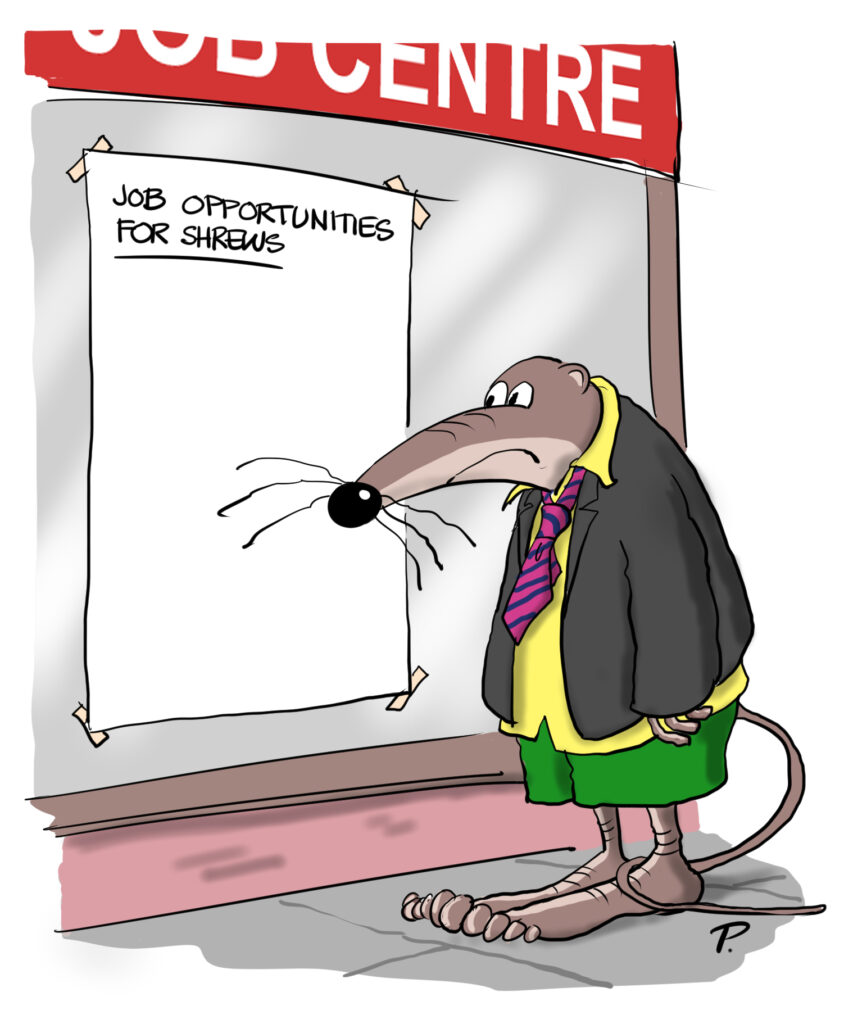 The festival mascot, Barry the Shrew, might now retire.