The Surreal McCoy’s report from Athens:

The British man seated next to us on the plane was a former investment banker, newly-qualified as a paramedic. He was on his way to one of the Greek islands to volunteer with an international search and rescue team. The weather was warming up and the seas were becoming calmer. Apparently May is the beginning of refugee season. 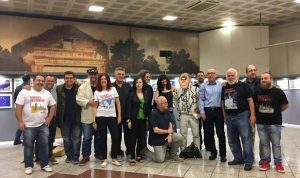 Some of the participating cartoonists.

Myself and Glenn Marshall were also on our way to Greece. We had been invited by the Greek Cartoonists’ Association to attend the opening of the Sweet Europe exhibition on behalf of the PCO. 28 PCO members had contributed their work along with 29 Greek cartoonists. Over the next three days we would be received with much warmth and kindness, making this an unforgettable trip. 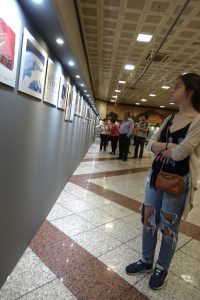 The exhibition was being held in a hall at one Athen’s main metro stations – a large and airy place with specially built walls and lights to showcase the cartoons. They were printed onto thin A3 aluminium sheets that are long-lasting and fade-proof. Thanks to its central position last year’s exhibition on refugees attracted around 150,000 people over the week. And this year’s exhibition, on our differing views of Brexit and the EU, had already brought in many visitors: a mixture of locals and tourists, the organisers providing translations of the cartoons into both Greek and English. 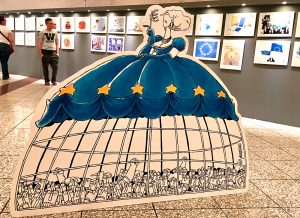 During the day we sat around a table in the middle of the hall talking and drawing with the Greek cartoonists. Many common stories about their situation emerged: the non-payment of wages, the closure of newspapers and magazines, the household bills that couldn’t be paid (the price of electricity had recently trebled overnight), but still they carried on drawing. We heard the same from the Greek public who were not shy in expressing their opinions. One woman who used to work in real estate said she couldn’t even find a job as a cleaner. Passions were running high – one visitor angrily shouting at our Greek colleagues that they should be careful what they drew, that they should remember what happened to those French cartoonists.

The sweet and sour views from the comments book.

The formal opening was attended by Greek members of parliament including the parliament’s President. (The Greek parliament had part-sponsored the exhibition along with the Attika municipality, the Journalists’ Union of Athens Daily Newspapers and the Urban Rail Transport Company).The mood in parliament may have been sombre beforehand (they had been discussing terms for a fourth EU bailout) but it lightened somewhat as they looked around the cartoons. 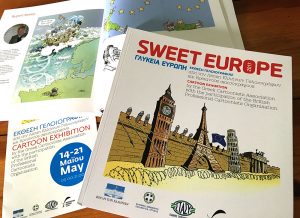 Many thanks to all those PCO members who contributed work and made this exhibition such a talking point. If the idea was to promote debate and exchange of ideas then it was a great success and there are hopes that it will be brought to the UK in the future.

Xenia is the ancient Greek concept of hospitality and we were reminded of the Greek quote: A stranger is a god in disguise – treat the stranger as your friend. We were overwhelmed by the grace and generosity of our Greek hosts and would especially like to thank the president of the Greek Cartoonists’ Association Panos Maragos and his team of volunteers for all their hard work and hospitality. ευχαριστώ! Thank you!