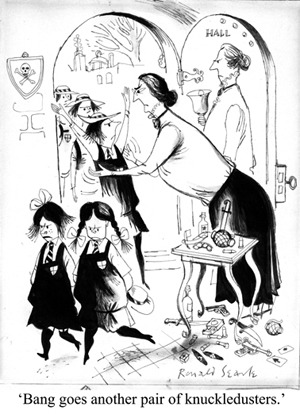 Next Wednesday, March 3, sees the 90th birthday of the hugely influential British cartoonist Ronald Searle. To celebrate, two exhibitions of his work will open on that day.

The creator of St Trinian’s (above, from Lilliput magazine) and illustrator of the Molesworth books, who has lived and worked in France since the 1960s, will be celebrated in shows at the Cartoon Museum and the Chris Beetles Gallery in London.

Ronald Searle – Graphic Master, an exhibition of cartoons, illustrations and reportage from across the world is at the Cartoon Museum until July 4. This exhibition shows 140 works from across his 75-year career, from his early cartoons for the Cambridge Daily News in the 1930s to political cartoons for Le Monde in the 2000s. 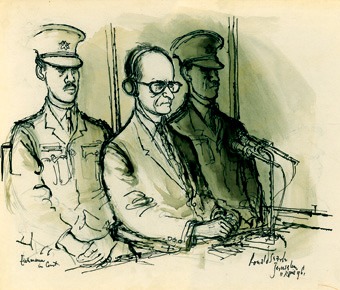 Some of his drawings recording life and death in Japanese prisoner of war camps, works which he famously hid from his captors, are included in the exhibition. Searle later produced reportage cartoons for American magazines such as Life. In 1961 he drew the trial of Adolf Eichmann in Jerusalem, above.

For more details on the show, visit the Cartoon Museum website. 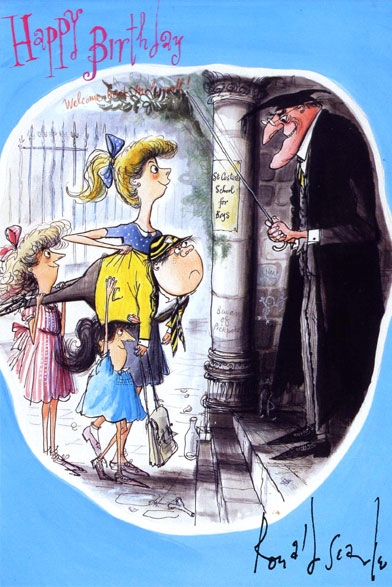 The retrospective exhibition at Chris Beetles Gallery, called Happy Birthday Ronald Searle, runs until April 3. It features more than 200 cartoons and illustrations, all for sale, again covering all aspects of Searle’s career, including work from Punch and the News Chronicle, reportage, and adverts.

There are also by loans from private collections, which include work for Life drawn during the Nixon/Kennedy presidential campaign of 1960. The exhibition can be viewed at the Chris Beetles website.

To whet your appetite, The Times ran a very long and informative interview with Searle at the weekend: read it here. The Searle tribute site Perpetua is also well worth a look.

PrevPrevious101 uses for a cartoon
NextArtist of the Month – Robert DuncanNext