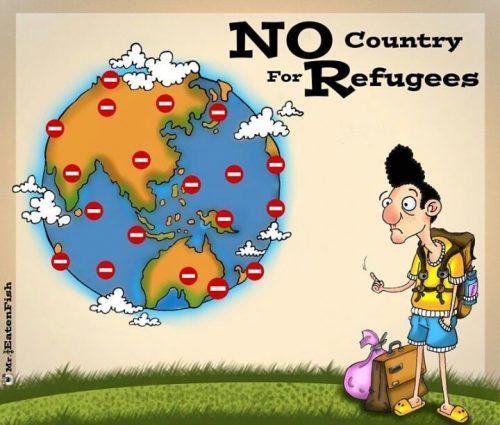 The CRNI statement in full:

The Manus Regional Processing Centre, Papua New Guinea has been making headlines again in recent weeks: firstly on Good Friday when prolonged gun fire on the camp’s perimeter aimed at detainees’ accommodation was the apparent result of a disagreement with locals over a football match; secondly for outrageous comments made by Australian immigration minister Peter Dutton about the same incident; and lastly after a meeting between Prime Minister Malcolm Turnbull and Vice President Mike Pence indicated that the USA would indeed honour the refugee relocation agreement made in the final days of the Obama administration.

An apparent reversal of fortune – President Donald Trump had famously described the deal as “dumb” and promised to re-examine its merits – sounds like good news for the Manus detainees, including Eaten Fish, the 2016 winner of our Courage in Editorial Cartooning Award.

However it is worth remembering that Eaten Fish’s refugee status has never been recognised, making him ineligible for any help that the USA might offer and that in any case comes only after lengthy and exhaustive “extreme vetting”, the kind of process during which he would certainly fail to give an adequate account of himself due to his diverse mental health problems.

This raises the question of what happens next since the camp is set to close before the end of the year. Eaten Fish exists in an ill-defined legal category, officially notified by the authorities of their intent to repatriate him to Iran months ago but in all likelihood facing a future as a prisoner on PNG. One possibility is transfer to a new facility that we understand is being planned in Port Moresby. Its Bomana Prison already houses several former detainees.

We asked Janet Galbraith of the Writing Through Fences project for her assessment and she was frank about the degree to which the odds are stacked against Eaten Fish, saying that even the best intended and well-resourced organisations’ help is rendered “disorganised and ineffective” against “determined politicians’ cruel policies, an apathetic and increasingly racist public and corrupted media.”

A report that ran recently in The Age and for which Janet provided information gives an accurate depiction of life on Manus for Eaten Fish’s compatriots and the many hundreds of men who have endured a unique, very modern and seemingly intractable method of torture over the last four years. The testimonies of journalist Behrouz Boochani, comedian and children’s entertainer Mehdi Savari, and Loghman Sawari – like Eaten Fish just a boy when he arrived on the island – are utterly heartbreaking.

And as for Eaten Fish, we call again for the only humane outcome after suffering such acute institutionalised abuse: immediate asylum on mainland Australia.

PrevPrevious“In my country I was threatened because of my works”
NextShrewsbury Cartoon Festival review served up.Next