When is a cartoon not a cartoon? 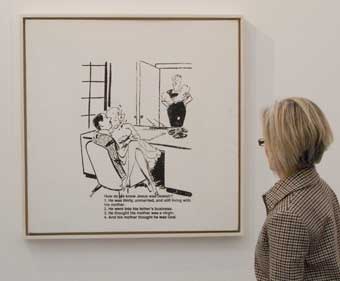 It’s always an uphill struggle for cartoonists to get work exhibited, because cartoons are generally not regarded by those whose job it is to decide such things as “Art” with a capital A.

So PCOer Chris Madden was more than a little amused, and bemused, to spot the above cartoon at the current Frieze Art Fair, which is largely seen as a critical barometer for all that is relevant, edgy, and, if you will, zeitgeisty, in the world of Contemporary Art (with two capital letters).

Of course it’s not actually a cartoon, it’s a silkscreen print by American artist Richard Prince of an existing cartoon (by someone else, uncredited) with additions in acrylic.

Mr Prince made his name “rephotographing” existing works. His image, “Untitled (Cowboy)” a photo of a cigarette advert, was the first photo to raise more than $1 million at auction, despite the obvious copyright violation. So we’re sure he wouldn’t mind the PCO rephotographing “his” work to get a closer look.

Ah, you see, the caption is nothing to do with the image. It’s incomprehensible so it really is ART. With three capital letters.

So, the question for you, readers, is this: Where does rip-off end and homage begin? Answers in comments below please.