The future in slow cartooning?

Our Chairleg – Andy Davey writes: An article in “Prospect” magazine recently by Susan Greenberg (here) highlighted a phenomenon among marketers and brand consultants which is called, with the apocalyptic grandiloquence you would expect from that band of cappuccino cowboys “the end of the middle”. This refers to the abundance of cheap, reasonably functional goods and […]

The joy of photomontage

This may seem like an attack of pique or bitterness…but no. Strange coincidence…possibly. I had just been ranting to the cat about an illustration I’d seen in the previous week’s New Statesman. The cat disagreed, but what does he bloody know? The illustration depicted Christopher Hitchens, ironically, as the Buddha [here]. Rather than a cartoon […]

PCO Procartoonists – Art or what? 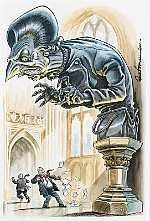 A wonderful Dave Brown cartoon sold recently at a Bonhams auction of the late Tony Banks’ cartoon collection for the handsome price of £8400GBP. This must bring a tear to the eye of the venerable Brown, having seen not a penny of this largesse. Dave’s artwork is perhaps a paradigm (ah, that much misused word) […]