Cartoonists in this country might be feeling the pinch at the moment, but at least they don’t work under the threat of arrest, assault or even death. In Honduras recently, cartoonist Allan McDonald (interview) was detained for 24 hours, had his studio ransacked and cartoons and drawing materials destroyed following the publication of several cartoons […] 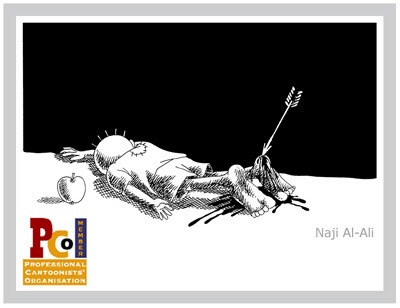 Shooting the Witness, an exhibition by the Palestinian cartoonist Naji Al-Ali, to commemorate the 20th anniversary of his assassination in London, is at the Political Cartoon Gallery in London from March 6 until April 12. Naji Al-Ali was one of the most prominent cartoonists in the Arab world. He had no political affiliations and the […]