Edward Lear is best known for his humorous illustrations and nonsense verse, but his highly-detailed zoological illustrations are the focus for a new exhibition at The Royal Society. Read more here. With the Paralympic Games now underway, The Beano features Oscar Pistorius as a sporting special guest. Mark Anderson outlines some of the major markets […]

Foghorn and the silly season 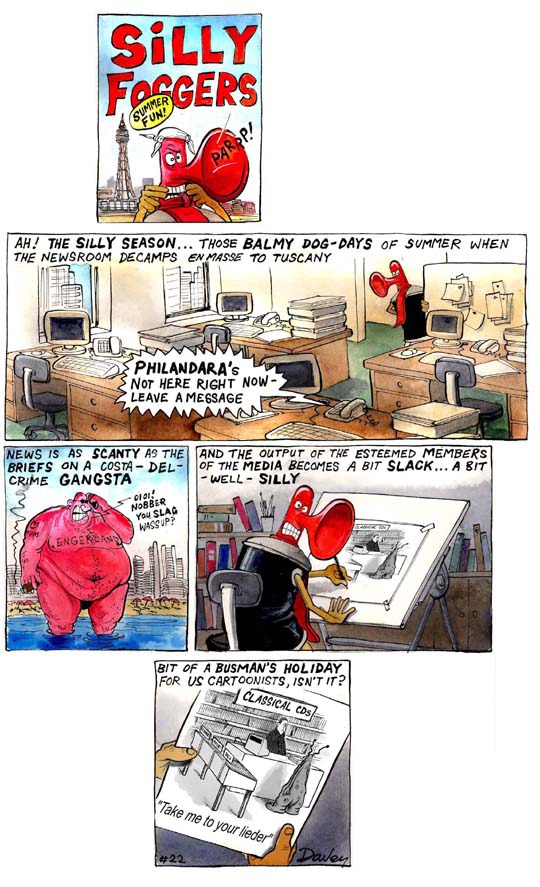 From Gin Lane to the Information Superhighway…

Cartooning and copyright have a long history together. The very first visual copyright law – The Engravers’ Copyright Act of 1734 – was prompted by artist and engraver William Hogarth and his battles with unscrupulous printmakers who made unlicensed copies of his work. Of course, the surplus of supply made his originals, or any licensed prints of them less […]

Following the learned article in the New Statesman magazine pondering the future of cartooning, the Professional Cartoonists’ Organisation would like to invite the title to follow a suggestion from its companion in current affairs, The Spectator. We note that inside the edition the New Statesman is asking its readers whether this is something they would like, and we would encourage all […]

After The New Statesman published this cover story in its current edition, The Spectator has responded by calling on the NS to publish more cartoons. Not a bad idea, if we say so ourselves… Comics expert Paul Gravett interviews illustrator and picture-book author Shaun Tan over on his blog. As prevously mentioned, Tan will be […]

Our anthropomorphic friend pleads on behalf of the UK’s manufacturers of off and on colour jokes.

Foghorn gets hip to the jive

Foghorn acts as the anthropomorphic agent to the UK Professional Cartoonists’ Organisation and we, er, endorse this message.

Cartoonists on the road

Sometimes cartoonists have to get out of their squalid garrets and get out on the road. So Martin Rowson, political cartoonist and Procartoonists.org member, has been telling the world about his work, most notably new graphic novel take on Gulliver’s Travels at the Edinburgh International Book Festival. Forbidden Planet has a report. Meanwhile, the US […]

The Dandy has received a huge amount of media interest since our post earlier this week about the comic’s struggle for survival, and sadly it has now been announced the last print edition will be published in December. Judge Dredd co-creator John Wagner has paid tribute to the comic, and the Dandy cartoonists Jamie Smart, […]