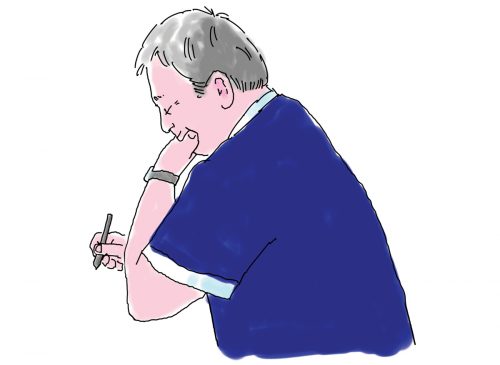 The PCO has a new Chairleg

After a very successful tenure as PCO Chairleg the venerable Bill Stott has decided to step down to spend more time with Joan Baez and his Jaguar XK8 – happily Bill will remain on the committee. Step forward Clive Goddard, who will be fitting into Bill’s Chairleg trousers. Clive needs no introduction but here’s one anyway penned by great […]

Jonathan Cusick writes: Support the festival this Christmas by giving the cartoon fans in your life a copy of the Shrewsbury Cartoon Festival Colouring Book! More than 40 black line cartoons from top cartoonists for your shading enjoyment. Relax, be inspired or just have a giggle. Fun for all ages. Sold to raise funds for […]

Glenn Marshall writes: I’ve long been a Mona Lisa obsessive, now I’ve come up with a cunning way to get others to join in. Along with Helen Wilde and Terry Sole of One New Street Gallery I’ve just hung the ‘Mona Lisa – Not Funny’ exhibition as a side-show to the excellent Herne Bay Cartoon […]

Cartoonist reveals another side

Procartoonists member Bill Stott has a solo exhibition called Playing Hamlet at the Beach Creative gallery in Herne Bay. He has exhibited and drawn in the town before, as part of the cartoon events there, but this time he’s gone all “proper artist” on us and the exhibition will feature 30 non-figurative paintings. To ease […]

Paul Hardman reports on the first Southport Mini Cartoon Festival, which took place on the August bank holiday weekend and was arranged at the very last moment, with little or no budget or publicity I have for many years thought that my now-hometown of Southport in the North West of England would be an ideal […]

A little on the surreal side

Here are some cartoons submitted by Procartoonists.org members for the Cartoonists Beside the Surrealside exhibition which can be seen at Beach Creative in Herne Bay later this month. The exhibition at the gallery in Beach Street has already been extended. It will now run from Wednesday 30 July until Tuesday 12 August. Opening hours 10am-5pm. […]

Kasia Kowalska and Royston Robertson write: Cartoonists including the PCO members Bill Stott and Noel Ford, above, are involved in the first Southport Festival of Art. More on that here. An exhibition of Tony Husband’s Private Eye cartoons is on display at The Swan in Dobcross as part of the Greater Manchester Fringe Festival until the end of July. What a week for Marvel, […]