The Shrewsbury Cartoon Festival doesn’t actually finish at the end of the weekend. Exhibitions continue in venues across the town and organisers run workshops for people keen to explore the skills of drawing and communication. Cartoonist Wilbur Dawbarn ran one of these events and here are photos from his workshops. Bloghorn thanks Shropshire Council’s event […]

The Shrewsbury International Cartoon Festival is just around the corner, so to help you find your way around the numerous exhibitions, workshops, talks and events, Bloghorn has put together a handy interactive map of what’s going on this year. Just click on the map markers to get a run-down of what’s happening, or use the […]

Back to school with Cartoon Classroom

Comic artist David Lloyd (of V for Vendetta fame), cartoon historian Paul Gravett and teacher Steve Marchant (author of The Cartoonists’ Workshop) have created cartoonclassroom.co.uk. They plan to to centralize all information relating to the study of cartoon and comic strip creation in the UK. The website launches officially in early October and the trio […]

Here’s Hunt Emerson, underground comics star turned Beano artist, demonstrating comic poses during a workshop held at the appropriately named Infinity and Beyond comic shop in Shrewsbury. Remember, although the festival is over you can still see the exhibitions, as they run for several weeks. Check the website for details.

Everyone likes an online row, and cartoonist Rod McKie has provoked one on his blog with a blast at the recent Cartoon Art Trust Awards. (We blogged it here.) Rod is an established professional cartoonist, well known for his forthright opinions. In this article he dismisses the entire genre of caricature (“It’s a fairly tired […] 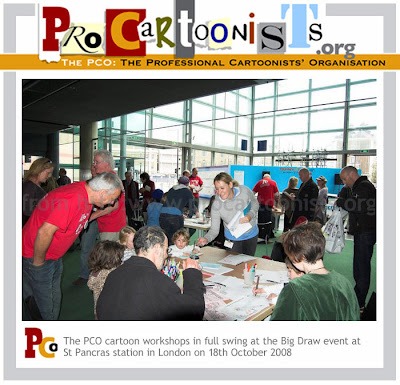 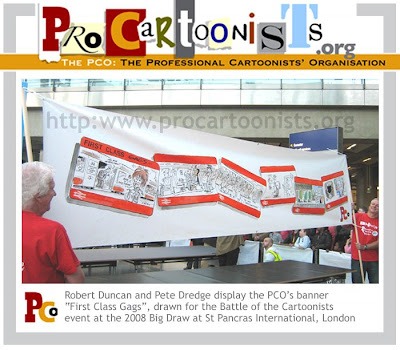 A stylish performance in North London yielded nothing but glory for Team Foghorn as the PCOers narrowly failed to carry off the much-coveted Battle of the Cartoonists cheer-off trophy. The squad of Pete Dredge, Robert Duncan, Kipper Williams and Royston Robertson delivered a fine performance on the competition theme – Transports of Delight – which […] 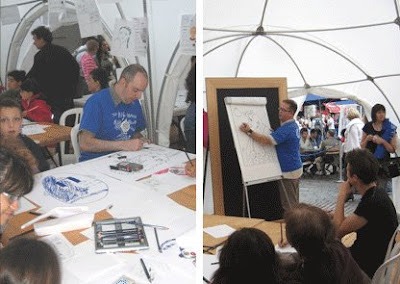