Rowson works go under the hammer

Bloghorn attended a charity auction at the Martin Rowson exhibition Creations in Bad Faith on Tuesday (June 8). The exhibition features artwork from New Humanist magazine, which is published by the Rationalist Association. Many items were sold for quite impressive sums, with the artwork for Rowson’s meeting of Richard Dawkins and God, above, and for […]

“A stick of rock, cock?” – the classic saucy postcard by Donald McGill, from Tate Britain’s Rude Britannia exhibition June looks like being a great month for cartoon shows, with three new exhibitions opening in London. The big one is Rude Britannia which sees cartoons being let loose in a gallery for “proper art”, namely […] 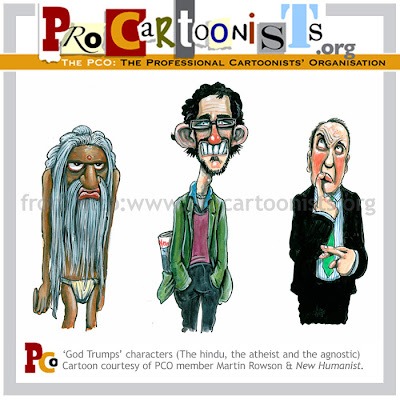 PCOer Martin Rowson writes… One way and another I’ve had quite an exciting week. At the Cartoon Awards on Wednesday I got slapped, quite hard, by the celebrated lawyer and serially rebellious Labour MP Bob Marshall-Andrews, who seems not to have liked an interview I did with him for The Spectator this August. Surprisingly enough, […]