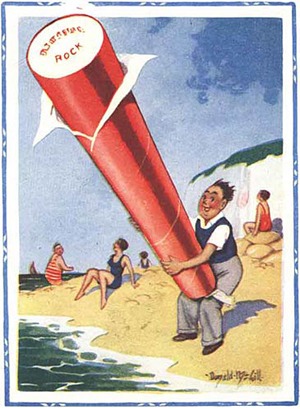 June looks like being a great month for cartoon shows, with three new exhibitions opening in London.

The big one is Rude Britannia which sees cartoons being let loose in a gallery for “proper art”, namely Tate Britain. It opens on June 9 and runs until September 5.

The exhibition explores British comic art from the 1600s to the present day and puts cartoons alongside a wide array of rude paintings, sculptures, film and photography. Ooer missus, there’s more here.

Then there’s Creations in Bad Faith, a selection of cartoons from New Humanist magazine by PCOer Martin Rowson which is at the Menier Gallery in Southwark from 8-12 June. More details here.

Opening on June 18 is Ray Lowry: London Calling, at the Idea Generation gallery in Shoreditch, which pays tribute to the cartoonist who died last October. Lowry drew for Punch, Private Eye and the NME, and was known as the rock ‘n’ roll cartoonist.

He created the iconic artwork for the Clash album London Calling, and alongside a look at his back catalogue the exhibition will feature contributions from 30 artists paying tribute to that. More details here.

Bloghorn will have more on these shows as they happen. In the meantime, Martin Rowson can be seen talking cartoons with Laurie Taylor on In Confidence tomorrow (June 1) at 10pm on the Sky Arts channel.