Jonathan Cusick writes: Support the festival this Christmas by giving the cartoon fans in your life a copy of the Shrewsbury Cartoon Festival Colouring Book! More than 40 black line cartoons from top cartoonists for your shading enjoyment. Relax, be inspired or just have a giggle. Fun for all ages. Sold to raise funds for […]

The Shrewsbury Cartoon Festival takes place next month and more details of the events have been released.  These include the title of the music-themed exhibition: With a Song in My Art – we are featuring cartoons submitted for the exhibition – and details on the live drawing events and workshops on creating strips,  mini-comics and, er, farting […]

So many sports, so many new terms to learn. You can enjoy more great jokes in our permanent portfolios or scroll back through our Personal Bests exhibition.

For the week ending 1st May 2009, we have a Shrewsbury Big Boards Special, a selection of some of the giant cartoons seen at this year’s festival. One: Steve “Bestie” Best on CO2 emissions Two: Jacky Fleming’s Mrs Darwin Three: Kipper Williams looks at a mayfly’s day Four: Clive Goddard on human resources Five: Dave […] 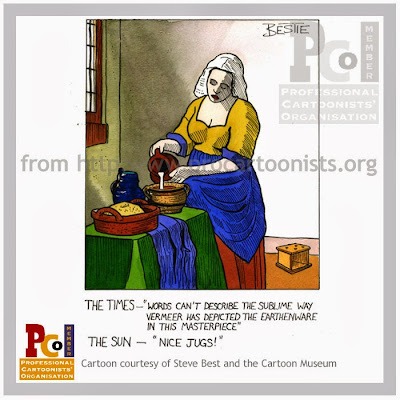 The curator of the UK’s national Cartoon Museum Anita O’Brien has contributed an exhibition to the Shrewsbury festival this year. This cartoon from Steve (Bestie) Best is one of the many on show now. You can click the cartoon to see a larger version. British cartoon talent From the PCO (Professional Cartoonists’ Organisation)