The sun shone on the righteous – and on the cartoonists in Shrewsbury. It was a bumper gathering in the town this last weekend, with visitors and participants drawn from far and wide. Few more so than festival regular Dean Alston from Down Under, whose ace Big Board, along with a Noel Ford classic, was among the first things to greet arrivals in The Square. Close by worked guest cartoonists from the States, Maria Scrivan and Ken Krimstein, while further input to the international flavour of the day came from the strong deputation of Belgians, all involved in the European Cartoon Centre at Kruishoutem near Ghent. 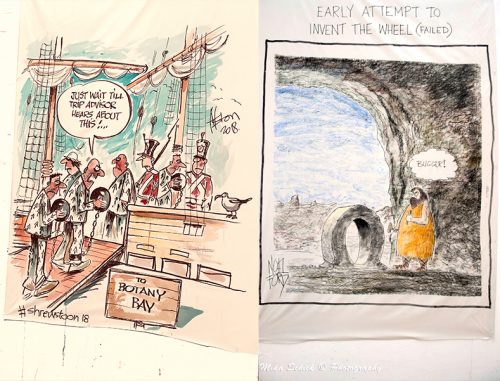 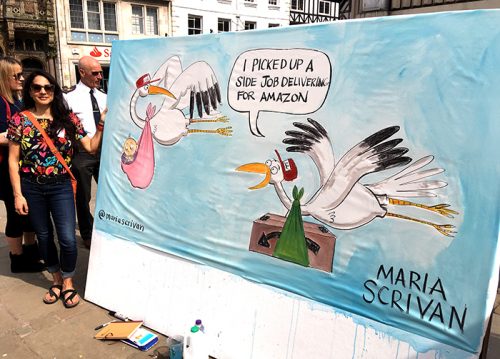 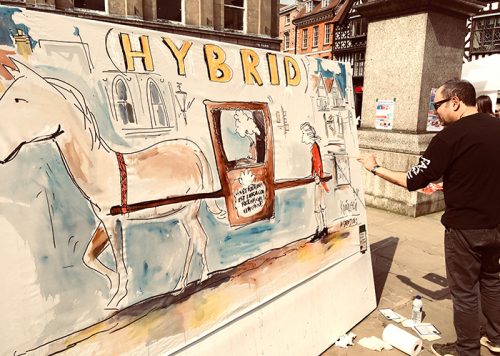 US cartoonists Maria Scrivan and Ken Krimstein with their big boards. 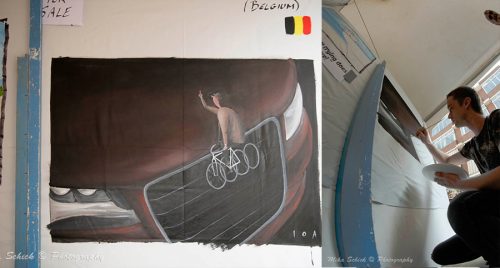 Cartoon by Nikola Hendrickx from Belgium and Nikola in action. 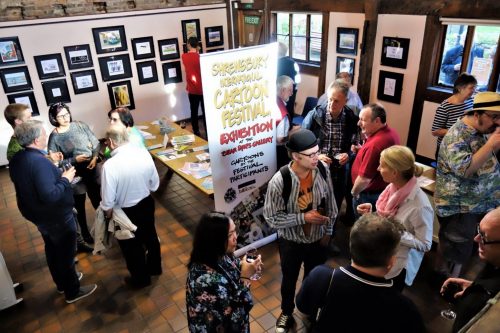 The private view of the ‘Are we nearly there yet?’ exhibition at The Bear Steps Gallery.

This was the 15th Shrewsbury Cartoon Festival and the theme of Transport was a fertile and perfect choice. The galleries (Bear Steps, Theatre Severn & V.A.N, plus Wendy Shea exhibition at Participate) gave proof, if ever needed, of what can be done from kicking around a good subject and, back in The Square, heads spun towards the reassuring sight of Air Flight Marshall at the check-in desk for budget airline Icarus Air. 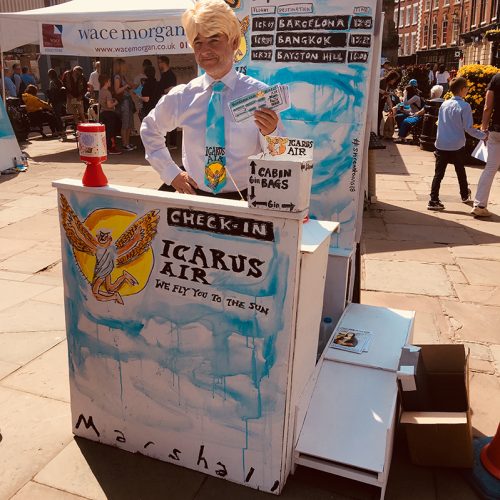 The GORGEOUS Glenn Marshall at the Icarus Air check-in desk. 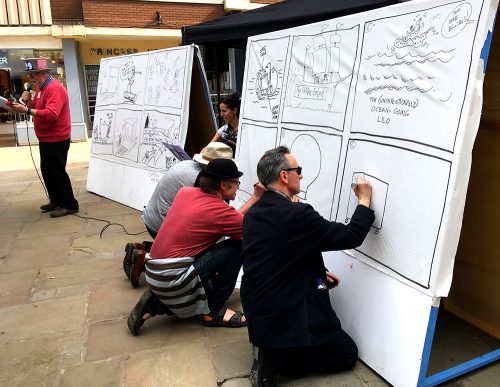 Roger Penwill fronts the Drawma while Noel Ford, Wilbur Dawbarn and Royston Robertson take to the boards accompanied by The Surreal Accordionist.

You can count on Shrews for good live music from beneath the Market Hall and so it proved throughout. Mid-afternoon came the Drawma, with mellow accordion softening the oohs and aarrghs of those there for quick-drawn gags and terrible puns. 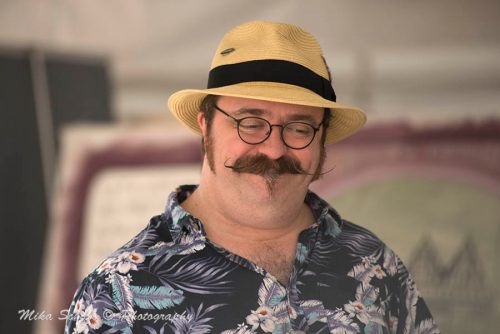 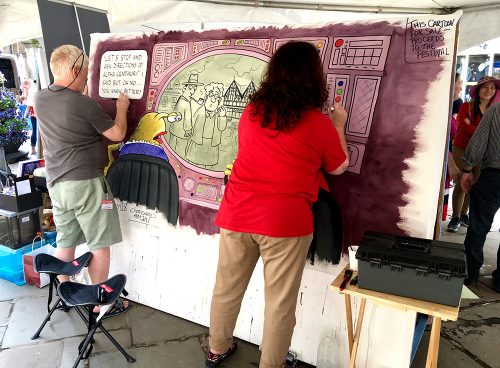 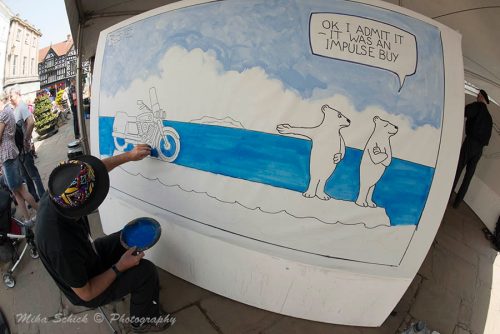 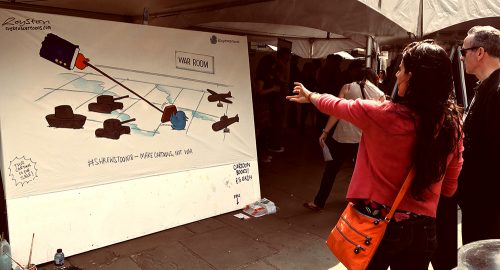 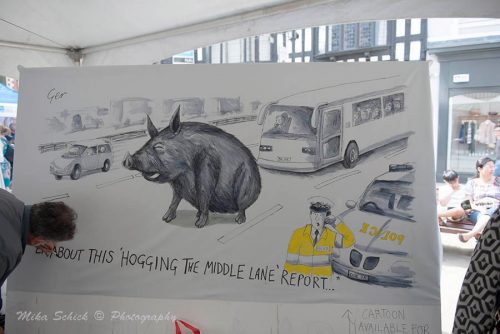 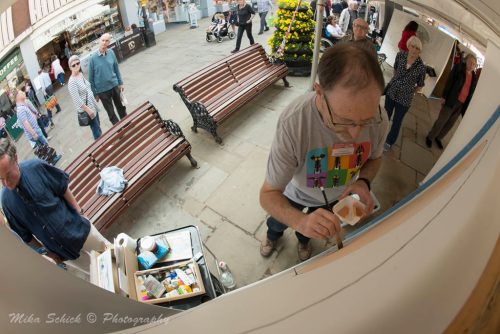 The top of Rich Skipworth.

The Surreal McCoy and her surreal cartoon. 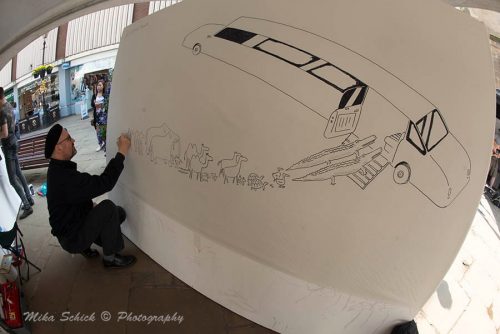 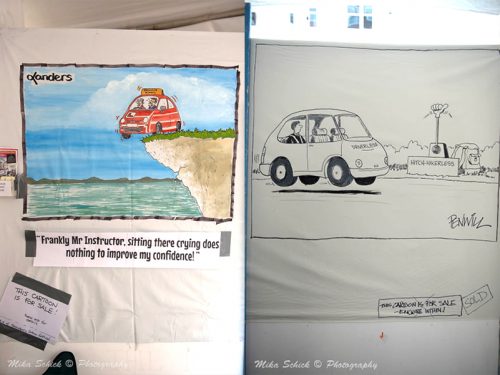 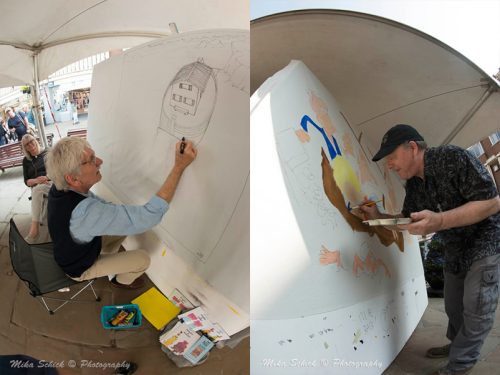 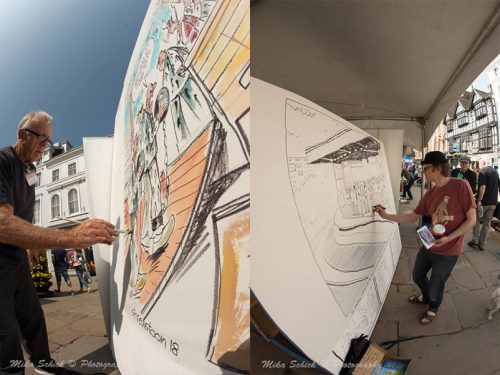 Dean Alston and Wilbur Dawbarn doing some more drawing and colouring in. 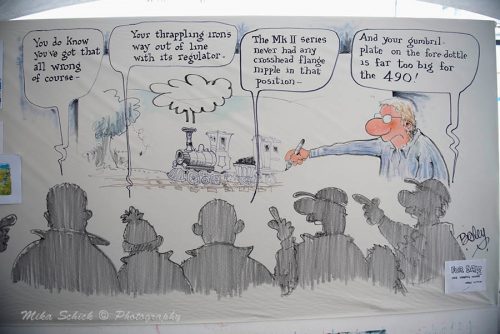 Rupert Besley on a familiar scene from a cartoonists daily life. 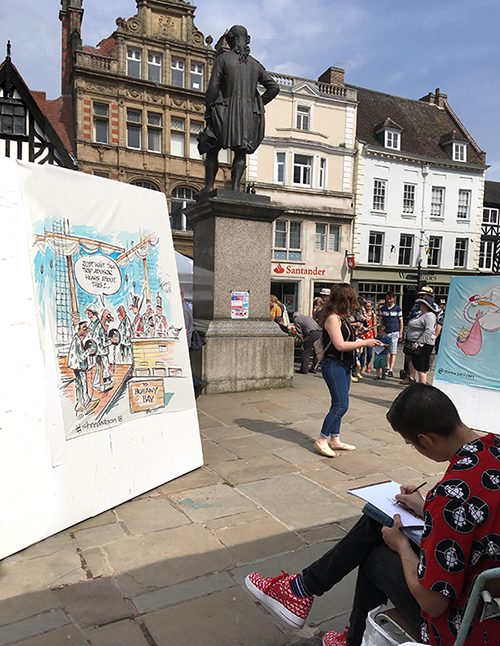 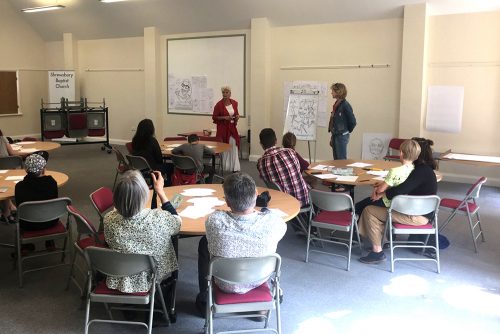 The cartoon workshops are an important part of the festival – this year tackling caricature, movement in drawings, an automobile barn dance plus Stop Motion animation (Barry the Shrew) and some fun paper planes (from Biggles Rudling). Festival patrons Alex Lester and Martin Wainwright came up trumps in their support of the Festival, the former using his radio interview skills to host the panel of cartoonists in conversation at the Wightman Theatre on the Friday evening. The latter was able to apply some of his editing experience to the list of rules drawn up for the Air Cartooning contest that rounded off the following evening. And, on the Sunday morning, while bikers gathered in their droves on the outskirts of the town, festival participants were treated to a fascinating tour of Historic Shrewsbury. 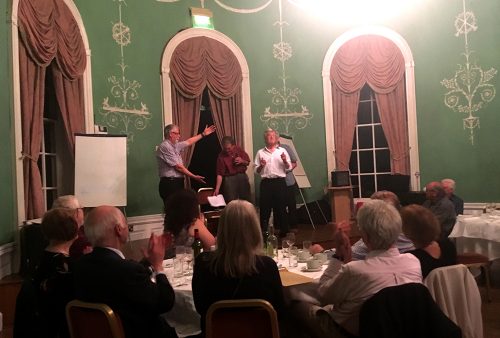 Thanks and full credit to all responsible, beginning with organisers Sarah Knapp, Bill McCabe, Tim King, Roger Penwill, Noel Ford, and Jonathan Cusick, along with all the volunteer helpers, and not forgetting the many participants (including visitors) who made the whole thing so successful.

Thanks also to Mika Schick for the excellent photographs.