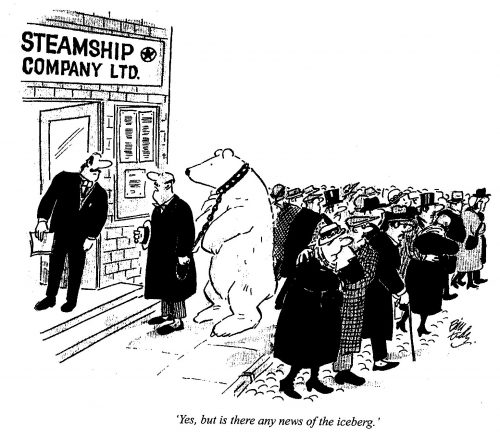 Pete Dredge writes: Van Gogh’s “Sunflowers”, Da Vinci’s “Mona Lisa”, Edvard Munch’s “The Scream”…Bill Tidy’s “Any news of the Iceberg?” All these great artists produced a prolific amount of brilliant work during their illustrious careers but, for some reason, they are mainly remembered for just one piece from their impressive canon. Indeed the former may […]

We’re blowing our own trumpet this week with a Round-up focusing on members of Procartoonists.org — the Professional Cartoonists Organisation — as they seem to be a busy lot at the moment. First up is Kate Charlesworth, whose book Sally Heathcote: Suffragette, above, is out now. You can read a “behind the scenes” piece at […]

The Surreal McCoy reports from the Hey Wayne! cartoon show. Off to Manchester for the weekend and a treat in store at the Richard Goodall Gallery in the city centre, where four cartoonists were exhibiting their unique takes on the theme of cartoons and art. Not only was there artwork aplenty on the walls but the […]

Above: It’s difficult to whinge when your work is given pride of place in a fancy art gallery, but Procartoonists.org member Tony Husband still managed to include this observation of the cartooning community in the Hey Wayne! cartoon show currently taking place in Manchester. Tony’s art-related cartoons share the walls of the Richard Goodall Gallery […]

Procartoonists  Bill Stott, Tony Husband, Chris Madden and Bill Tidy will open Hey Wayne! An art themed cartoon show at the Richard Goodall Gallery  in Manchester. The show is a part of the Manchester Literary Festival and will open on October 12th.

You may have noticed a lack of blog posts last week, this was caused by various changes going on behind the scenes to this website. To make it up to you, we offer an early round-up of cartooning links this week, as later we’ll be concentrating on this week’s Shrewsbury Cartoon Festival (April 19-22). First up, you […]

Cartoons kick over the statues at V&A

After much media hoopla, Private Eye: The First 50 Years opened at the Victoria & Albert museum in South Kensington, London, yesterday. The exhibition will run until January 8. The free exhibition explores the wealth of artistic talent that the magazine has showcased since 1961 and features original artwork for some of the funniest Private […]

From Herriman to Holte: Another ten great cartoonists

The cartoonist Gerald Scarfe has made a list of his ten favourite cartoonists, for the Daily Mail website. It includes some inarguable choices as well as some surprising ones. Ronald Searle, widely regarded as Britain’s best living cartoonist, is on there. There are also choices from the worlds of fine art, such as Picasso, and […]

The legacy of Punch – and the professional cartoonists

Evidence for the existence of a predecessor publication to our own Foghorn cartoon magazine has been revealed on a national media outlet. You may listen again to the wireless segment here. The PCO: Great British cartoon talent From the PCO (Professional Cartoonists’ Organisation)