The winners! Peter Schrank standing in for Peter Brookes, Photo © Kasia Kowalska  Clive Goddard writes: Another year of backslapping and mingling with strangers has been and gone at the glitzy Poltical Cartoon Awards. This time the whole event was forced to decamp from its usual palatial venue due to ‘the impending election’ causing everyone to cram […]

The death of Nelson Mandela inspired poignant tributes from UK cartoonists, among them Peter Brookes in The Times (above), Peter Schrank in The Independent and Christian Adams in The Telegraph. Elsewhere, the South African cartoonist Zapiro tells the BBC a personal anecdote that demonstrates Mandela’s appreciation of satire. Congratulations to Len Hawkins, who has been […]

The gifts may have been exchanged and the turkey polished off, but there’s still time for a few festive treats of the cartooning variety that may have escaped your attention over the Christmas period. You can enjoy every installment of Peattie and Taylor‘s 15-part seasonal Alex tale, It’s A Wonderful Crisis, as it unfolds over […]

We spotted this great work this week … One: Kal in The Economist on Obama’s hand of friendship to Iran Two: Peter Schrank in The Independent on Supergordon and the IMF Three: Martin Rowson in The Guardian on the BBC and the DEC The PCO: Great British cartoon talent Subscribe to The Foghorn – our […] 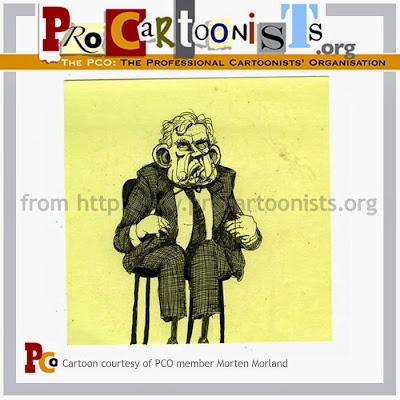 PCOer Morten Morland won the Political Cartoon Society‘s cartoonist of the year yesterday. Bloghorn is publishing one of Morten’s Post-it note caricatures of Gordon Brown above. Bloghorn’s alter ego, and the current chair leg of the PCO, Andy Davey said: It’s great that Morten has won this. He’s one of the best cartoonists working in […]

Bloghorn spotted this great work this week… One: Holland in the Oldie on Playing Health and Safety Two:Matt of the Telegraph on the GCSE results Three:Peter Schrank of The Independent on Russian bears British cartoon talent From the PCO (Professional Cartoonists’ Organisation)