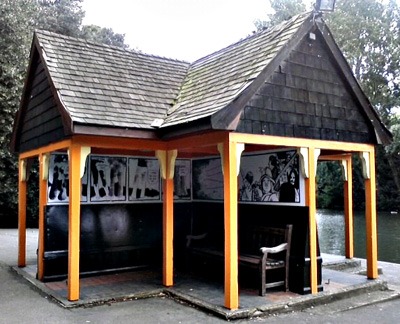 Cartoons and comics strips can often be seen in some surprising places, but probably none more so than this boating shelter in Battersea Park, London.

The comic artists Sean Azzopardi, Joe Decie, John Cei Douglas, Ellen Lindner, Douglas Noble and Paul O’Connell drew eight different short comic strips about a fictional 1974 rock concert in the park. These have been enlarged and pasted on to the shelter and can be read in any order.

Cartoons outside the printed page do have to compete with some “real world” factors though. And in this case it’s not graffiti, as you might expect, but a staggeringly large colony of spiders!

The boating shelter strips accompany the Hypercomics exhibition which is at the nearby Pump House Gallery. 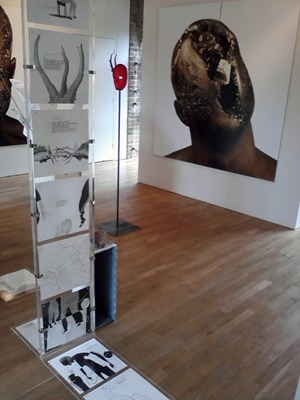 It’s very much an experimental exhibition, with comic strip narratives spiralling off in all kinds of directions and intersecting with the building itself.

Like any experiment it’s not wholly successful, some of the strips are far to wordy to be exhibited on walls. But McKean’s room worked brilliantly and was the stand-out for me, telling a compelling story with beautifully drawn comic frames alongside sculptures, photography and masks.

Hurry if you want to see this show though: it finishes on Sunday, September 26: Hypercomics: The Shapes of Comics to Come.