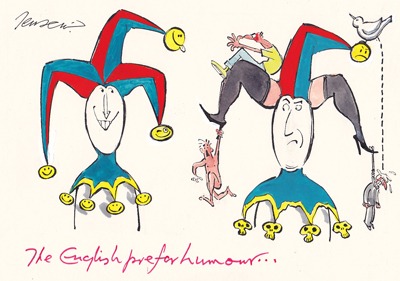 International cartoon exhibitions should be encouraged and they will continue throughout the years. The symbolic stone walls, barbed wire and the dying doves will still be there, awaiting to be transmuted into the pure gold of a beautifully drawn idea.

Political cartoonists, even though their symbolism is also limited, have an ever-changing world on which to draw. Topicality generates excitement, which is great.

Then there are the niche cartoonists: nerd speaking unto nerd, where words can be used, thus freeing up the ideas, and ideas are more specific. On the downside, many of the ideas, like some wines, would not travel well.

The problem is that broad themes can become boring. Topicality and the occasional use of words can sometimes produce more interesting ideas. Niche stuff, limited though it is, and usually not wanted by Fleet Street, is where the some of the best cartoons are found.

Small may not be beautiful but it is often very, very funny. What’s the problem?

What do you think about John Jensen’s article? Have your say in the comments below.

PrevPreviousJohn Jensen on wit and wisdom: Part 2
NextArtist of the Month – Robert DuncanNext