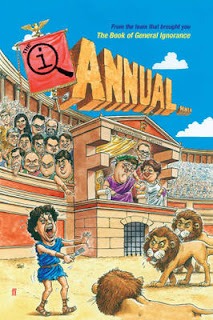 Cartoonist and PCO member Adrian PCOer Adrian Teal shares one of his highlights of 2008;

As the shadows lengthen, the nights draw in, and Cumbrian fell-walkers are forced to use sheep as rudimentary buoyancy aids, I find myself looking back over the dog-days of 2008 with a sentimental eye, and specifically at the highlight of my year.

I send a lot of sample stuff in the post, on spec, to various people outside the world of newspapers and mags, and more often than not, it ends up in the secretarial bin. However, once in a while, it generates some interest. Back in April, I got a call from the producer of the BBC’s QI, who also produced Not the Nine O’Clock News, Blackadder, and Spitting Image, where I had met him a few times when I was an irritating ten year-old.

He asked me to produce the front/back cover for the new QI Annual (available from all good bookshops, 6th November), and would I mind awfully doing a couple of double-page-spreads for the inside too?

This was a moment of pure, unbridled, cynicism-free joy for me, since the comedy stable from which he and his contemporaries come helped to shape the sense of humour of my generation. They are also very nice people, which makes a huge difference in this trade, believe me, and I was given pretty much a free rein to do what I thought would suit. I couldn’t believe my luck.

And they paid my invoice inside two days. Pinch me, someone.

The QI Annual 2009 by John Lloyd and John Mitchinson is published by Faber and Faber, priced £12.99