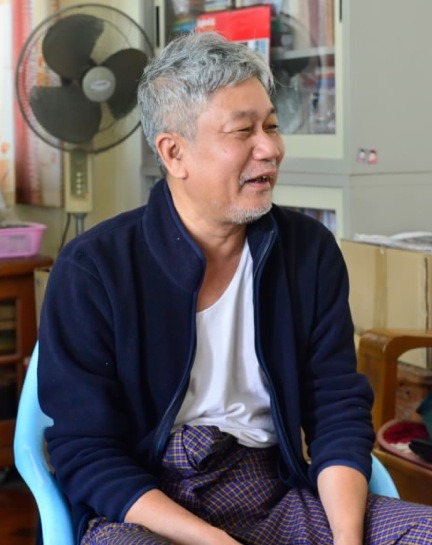 Burmese cartoonist APK at his home in Yangon, January 2016. (Photo by Mika Schick)

An exclusive report by The Surreal McCoy

Clutching a scrap of paper with an address on it scrawled in Burmese, I got into a taxi in Yangon. We crawled through the mid-afternoon haze of traffic and eventually came to a halt in front of a six-floor walk-up apartment block in one of the city’s inner suburbs. As I stood wondering where to find the doorbell, the cab driver got out of the car and pulled on a long rope hanging down from the top floor (a reminder of the power outages that regularly occur here). A head peered over the balcony and I was told to climb up to the sixth floor, where I was warmly welcomed by one of Burma’s most well-known political cartoonists.

Aw Pi Kyeh (APK) chose his nom de plume because it means ‘loudspeaker’ in Burmese and he likes to shout out loud about the political situation in Burma, also known as Myanmar. His real name is Win Naing and at 56 he has spent most of his adult life drawing cartoons, “not only to criticize… but also to communicate, educate and inform”. During the years of military rule he had around 400 cartoons removed from publications by the PSRD (Press Scrutiny and Registration Division), now defunct since the ending of direct censorship in 2012.

Along with his colleagues, APK still treads carefully. Certain issues are off-limits such as religion – Burma has a Buddhist majority and also a small Muslim population, with rising religious tensions. He even rules out drawing anything to do with the National League for Democracy (Aung San Suu Kyi’s party who are about to take over power from the military government) until the changeover is complete. To explain how the rules have changed since the abolition of censorship, APK likes to use a footballing metaphor. Under the previous military governments cartoonists were limited to using a corner kick for their idea and the audience, using their heads, would knock it into the goal past the goalkeeper (censor). With the lifting of censorship cartoonists are now able to kick a penalty but the government still holds the red card, so they must be wary “… and not to kick too high otherwise the audience won’t understand, or too low as the goalkeeper will stop it”. 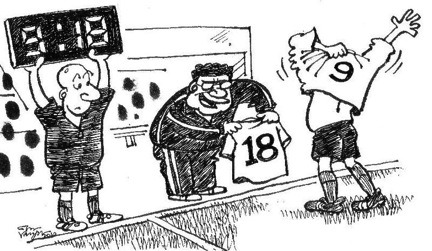 APK’s famous ‘soccer shirt’ cartoon from the time of the widely-criticized 2010 election – the player comes off the field to be replaced by another but simply switches shirts, a comment on the generals reinventing themselves as civilian politicians.

Political cartooning has a long history in Burma, Ba Gyan (1902-1953) being a pioneer of the genre. He also produced the country’s first animated short film in 1935 and has the honour of having a street in downtown Yangon named after him. Nowadays, and especially since recently increased internet accessibility, cartoonists of all ages are using social media to get their messages across. With no syndication there is intense competition to get into print, with publications paying $4 – $10 per image. APK estimates there are about 100 professional cartoonists in Burma at present. In fact the day before our meeting there was an announcement that a cartoonists’ union was to be formed and APK was asked to be president. “I’m too busy,” he laughed, “I’m not interested, I only want to draw cartoons!”

Nowadays he spends a lot of time giving talks about comic writing around the country and is heavily involved in campaigning on environmental issues. 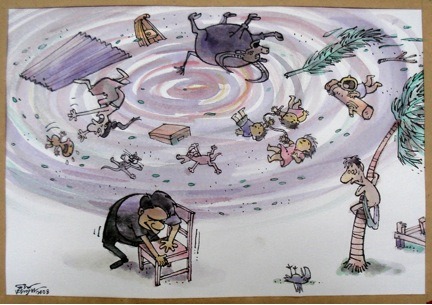 In 2008 Cyclone Nargis caused the loss of more than 138,000 lives in Burma, as well as incurring damage estimated at $10 billion. The Burmese military regime then held a referendum to retain power and APK’s cartoon depicts a man in trousers (a symbol of a military person) carefully righting his chair, a symbol of power) while ignoring the cyclone’s victims.

Of course I asked to see his work desk (reassuringly chaotic) and admired the many treasured books lining the walls in glass cases: including works by Sempé, Edward Gorey and lots of art books and Manga comics collected from his time abroad. (He completed a master’s degree in engineering at Harvard in 2002.) In 1996 he attended a cartoon festival in Ireland where he was astounded at his overseas colleagues’ predilection for beer. He bemoaned the lack of good drawing materials in Burma, especially brush felt tip pens – his predecessors were known to have used boot polish when ink was too expensive. 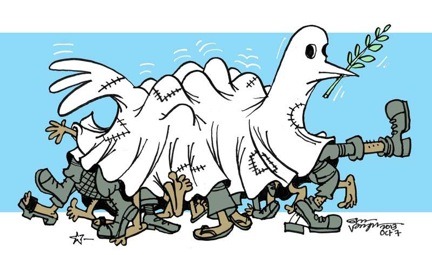 When Aung San Suu Kyi asked artists and writers to a conference last year, APK was invited to represent cartoonists. He warned that the younger artists wanted to leave for foreign countries and that very few could actually make a living from their trade. Even APK, at the peak of his career, has had to supplement his income with graphic design work. He also took lessons in animation from the French graphic novelist Guy Delisle, who published a book The Burma Chronicles in 2009 about his own experiences in the country.

As I was about to leave, APK’s charming wife appeared at the door having lugged several large bags of shopping up six flights of stairs, still smiling. At least the postman doesn’t have that onerous task – the same rope hanging down outside is also used to transport letters and newspapers via a giant bulldog clip. For him, anyway, there’s an upside to the outages.