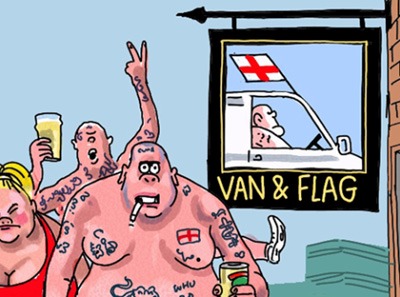 A football song created by the cartoonist Mike Barfield has been used as the soundtrack to a World Cup animation by another cartoonist, Patrick Blower.

As everyone seems to be releasing Eng-er-land football songs these days, it’s probably no surprise that there’s one by a cartoonist. But while most are all about flag-waving optimism, the song by Mike Barfield, who draws the strip Apparently in Private Eye, is a little more down to earth.

Called Don’t Set Your Sights Too High, Mike’s ukulele ditty, recorded on a home computer, made it into the final of a World Cup song contest on Radio 5 Live last week. Mike described the song as “an antidote to all the bombastic, triumphalistic swagger of pretty much every World Cup England song you’ve ever heard”.

Mike insists the song is realistic, rather than pessimistic – and bearing in mind the England team’s performance on Saturday, he may have a point – but in the end blind faith won and the song came second to one called, ahem, We Are The Rulers.

Now Mike’s song has been set to animation by Patrick Blower, a member of the PCO which runs the Bloghorn, and creator of the new Private Eye strip iBores. That’s a screen shot above, and you can see the full animation – and hear the song – here.

It’s part of Patrick’s Livedraw series which is featured on the Guardian’s Comment is Free website. The video seems to have attracted quite a few vitriolic comments (is there any other type on the internet?) though in fairness to the cartoonists concerned, that’s more to do with the Guardian’s decision to use the headline “Celebrating the British way”, rather than English. Still, it’s one way to get a debate going.