Double up at The Auld Acquaintance

Terry Anderson tells us about two chances to see a cartoon exhibition about the Scottish referendum:

The Auld Acquaintance exhibition is now fully under way in its two UK venues: Leiper Fine Art on West George Street, Glasgow and the News & Media Gallery at The Guardian & Observer newspapers, part of the Kings Place arts venue in London.

As in the exhibition’s French showing [we covered that here – Ed] work has been arranged according to point of origin with the additional bonus of a section of original drawings and paintings. These are for sale, as are prints of the digitally submitted work.

A range of Q&A sessions will be taking place in the gallery in the next fortnight including contributions from cartoonists Frank Boyle and Lorna Miller as well as Chris Cairns, David Kerr, Malc McGookin, Greg Moodie, Cinders McLeod and the Comic Soapbox Scotland project.  Book places at these free talks via Eventbrite. 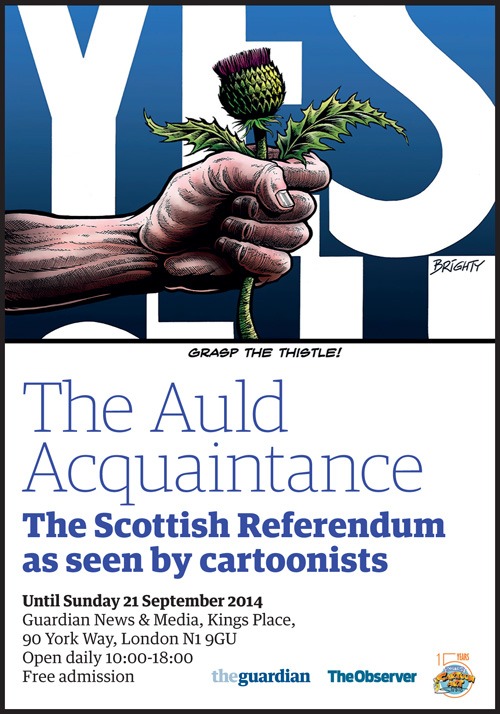 The Guardian has gone for a scattershot approach to its display which makes for impressive visual impact. At both venues the cartoons are highly visible from street level and sure to attract lots of interest from commuters and tourists.

In Glasgow the show is a stone’s throw from the offices of both the “Yes Scotland” and “No Thanks” campaigns and handy for the city’s rail link to Edinburgh. In London it’s in the thick of the hubbub at Kings Cross St Pancras and not far from the newly opened House of Illustration.

The exhibitions are free of charge and open daily. The show will close the weekend after the referendum. In Glasgow we shut on 19 September and in London on 21 September.

Our continued thanks to everyone who has given time and effort to make our tour a success, in particular Ewan Kennedy and Niall Campbell at Leiper Fine Art and Luke Dodd and David McCoy at The Guardian. Also to all PCO members who sent us cartoons.