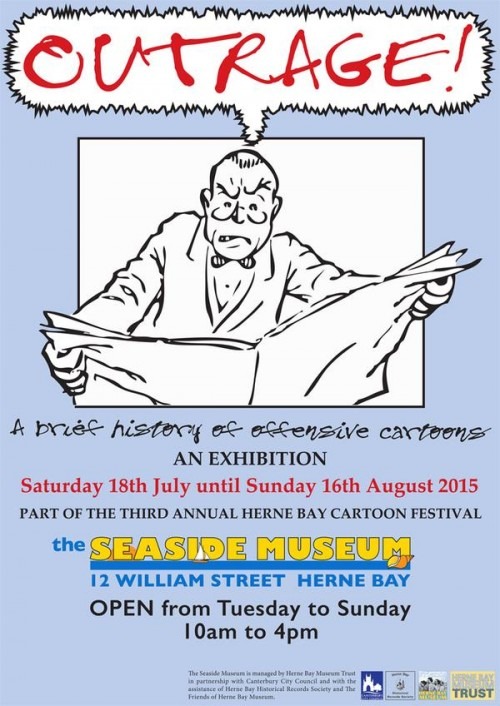 The exhibition Outrage! A brief history of offensive cartoons is now on at the Seaside Museum in Herne Bay, Kent, the first event in the third Herne Bay Cartoon Festival.

It includes works from the British Cartoon Archive in Canterbury and features David Low, the infamous Oz schoolkids’ edition, a cartoon Private Eye didn’t dare publish and a one that provoked a diplomatic incident. There is also a never-before-seen Ralph Steadman, his response to the Charlie Hebdo massacre, which is also a demonstration of the right to offend.

The main festival exhibition, Lines in the Sand, will be held at Beach Creative from 28 July to 9 August. The gallery is in Beach Street and is open Tues-Sat 10am-4pm and Sun 11am-3pm.

There will also be an exhibition of cartoons by the late Martin Honeysett, who exhibited and appeared at the first two Herne Bay events. That will be at the Bay Art Gallery, William Street, from 28 July. The gallery is open Tues-Sun 10am-4pm.

The main day of live drawing at the Bandstand, featuring big boards, workshops, caricatures, and more, is Sunday 2 August, from 12pm-5pm. There will also be comic strip and cartoon workshops at Beach Creative on Saturday 1 August and at the Bandstand on the Sunday.

The Herne Bay Cartoon Festival is sponsored by the Professional Cartoonists’ Organisation and and supported using public funding by Arts Council England.

We’ll have more nearer the time. You can see lots more coverage of the previous two events, including videos by David Good, in our Herne Bay archive.