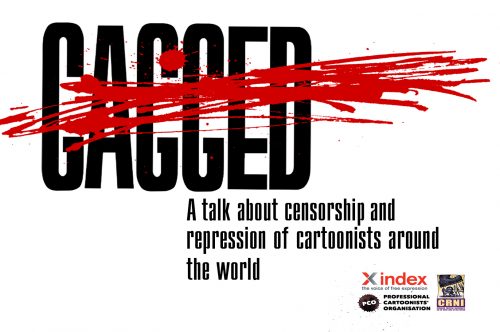 I was honoured to be asked by those nice people at Procartoonists to “host” an evening of interviews and talks to accompany the “Gagged” exhibition of cartoons at Westminster Reference Library on the subject of the oppression, censorship and gagging of political cartoonists around the world. My experience of hosting is limited to the point of zero, so I therefore accepted with trepidation but nevertheless with complete admiration for the cartoonists who have suffered for their art and reportage. As it turned out on the evening, my admiration was justified and afterwards I felt very humbled by the experience. 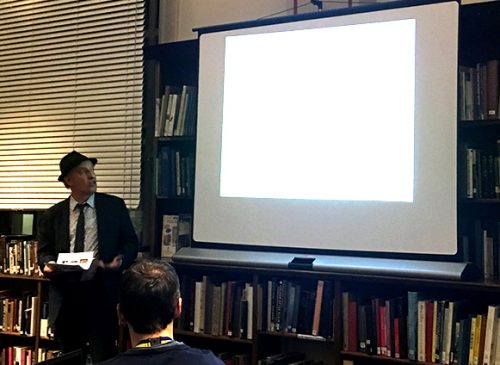 The quality of the speakers was excellent. First up was the Guardian’s own superbly scatalogical Martin Rowson, giving us a short history of poo in print and advice on how to successfully offend just about anybody in power. 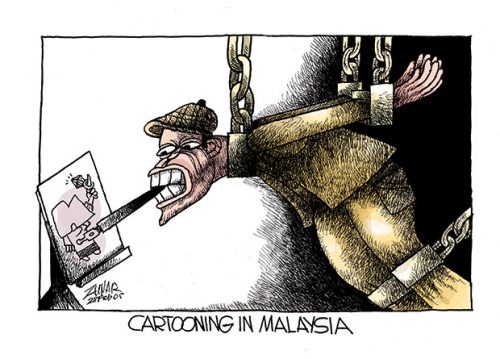 The evening then turned somewhat digital via Skype interviews and screenings of films of various cartoonists who fight their political systems despite hardship. A poignant dramatic intervention occurred here – we had booked the heroic Malaysian cartoonist Zunar to speak to us via video link but we could not establish connection. It was later revealed that his no-show was due to his arrest and confiscation of his phone and computer. He faces 43 years in jail because of his criticisms of the Malaysian PM but continues to draw because he feels that it is his duty to do so. Against this, it’s impossible not to feel absolutely humbled. The world needs obstinate, moral, courageous people like Zunar. 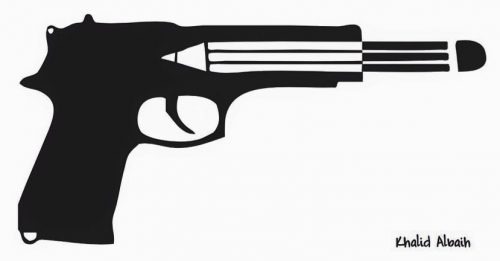 Our second cartoonist interviewee was no less impressive. Khalid Albaih, a cartoonist from Sudan (via Romania and the US) who now resides in Denmark in order to freely publish his political cartoons in a democratic environment. His cartoons (usually wordless) were used widely in Arab Spring demonstrations but he would not be able to publish such “seditious” work in those countries. Khalid was very eloquent and passionate about his need to draw political cartoons but has chosen not to associate himself with any media outlet for fear of being censored or corrupted. Consequently, he has a day job and draws at night. 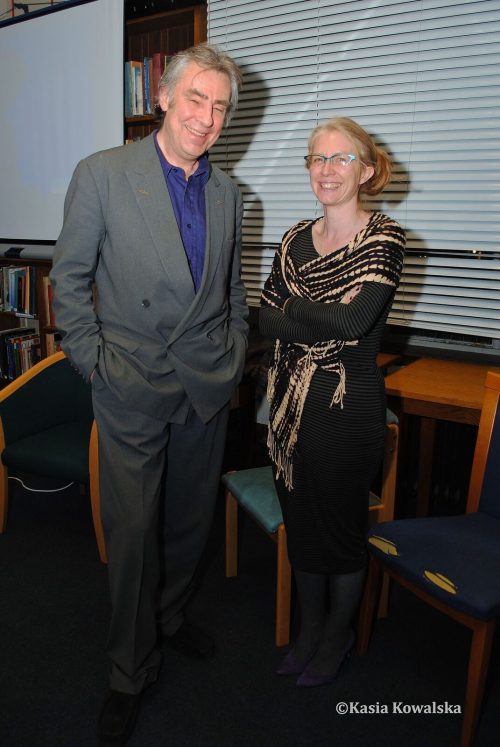 This was followed by a rearguard action from the estimable Jodie Ginsberg from Index on Censorship, showing the visceral power of angry political cartoons from around the world and how they have been suppressed, sometimes brutally. 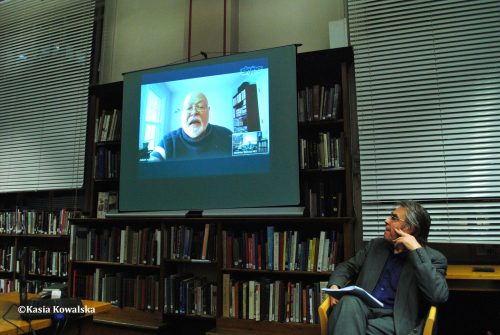 Lastly we were privileged to speak to Robert Russell, the founder of Cartoonists Rights Network International – a man who has probably done more than any to help and support dozens of imprisoned, harassed and endangered cartoonists around the world.

All of this must remind us of how lucky we are in western democracies. But it is useful to remember that, even in the UK, the conditions that allow satire to flourish are not fully met. Censorship exists in practical terms because of the severe bias of the traditional media.

The future of cartoons may well be that modelled by Khalid Albaih – radical, delivered via independent social platforms…but unpaid. And the message that emerged from the evening was that cartoons most certainly have a future. Each contributor underlined the importance of political cartoons, particularly in societies with a democratic deficit.

A film of the event will be available to view online in the new year.