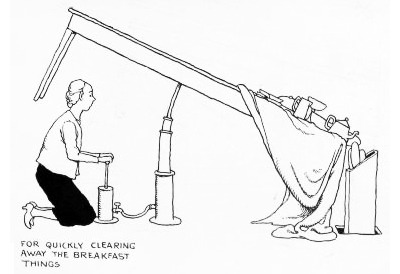 An exhibition of cartoons by William Heath Robinson is being held in Pinner, in the London Borough of Harrow, where the artist lived and worked for ten years.

The show, called Machines and Inventions, after the elaborate and somewhat improbable contraptions for which Heath Robinson is famous, will be held at West House in Pinner Memorial Park from March 19 until April 17.

The Chris Beetles Gallery is putting on the exhibition, which features 80 cartoons. They will be added to a major exhibition of work by Heath Robinson to be held in May at Chris Beetles’ own gallery in St James’s, Central London. 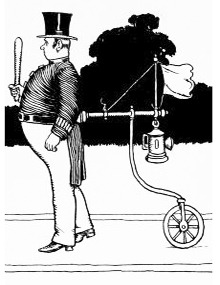 The show reflects a very English response to progress, particularly the technological developments of the early 20th century. Exhibited for the first time is a group of cartoons from Railway Ribaldry, which was published by the Great Western Railway in 1935. It’s hard to imagine any of today’s railway companies being happy to laugh at themselves in the same manner. Right: A simple device for preventing railway policemen from being run down when walking on the line.

Heath Robinson and his family lived in Pinner from 1908 to 1918. The exhibition is being staged in conjunction with the West House and Heath Robinson Museum Trust, which has raised more than £1,400,000 to transform the building. As well as a gallery, it is used as a venue for conferences and as a memorial to commemorate the people of Pinner who died in the two world wars.

You can view Machines and Inventions, which is a selling exhibition, online at the Chris Beetles Gallery.

Thanks Bloghorn. That other famous cartoonist Robert Duncan was also brought up in Pinner, and kissed his first girl in West House. Her glasses got in the way.

Angst, underlying sexual tension, passion and a rites of passage journey. You get it all on Bloghorn.