This year’s poster was created for the festival by © Marf.

The Herne Bay Cartoon Festival has landed for another year. This is the seventh consecutive festival in the lovely Kent seaside town. The theme for this year is Fly Me to the Moon referencing the fiftieth anniversary of the first manned mission to the moon in 1969. 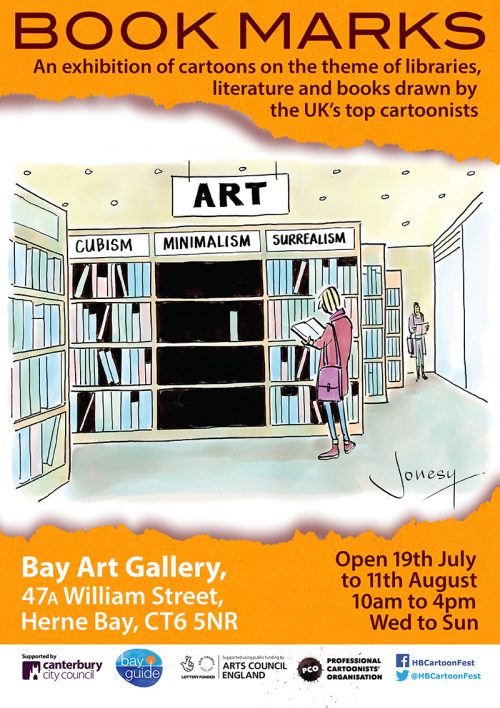 Also open now is Book Marks at the Bay Art Gallery in William Street. Book Marks is a PCO exhibition on the theme of literature and books which has come to Herne Bay from Westminster Reference Library as the first small step on a planned tour of the solar system. The show features work by over 30 members of the Professional Cartoonists’ Organisation (PCO) including a host of familiar cartoonists from the pages of The Guardian, The Independent, Private Eye and the rest of the British press. 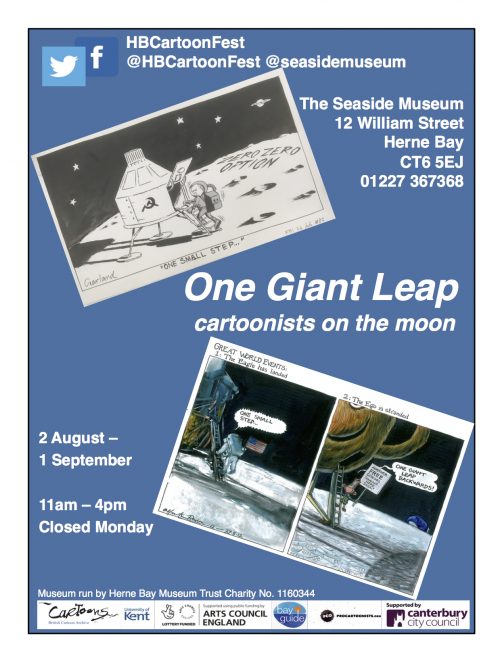 The festival’s third exhibition is One Giant Leap which will be open from Friday 2nd  August at The Seaside Museum, 12 William Street, CT6 5NR. This show features work on loan from the British Cartoon Archive held at the University of Kent. The exhibition includes original cartoons and artwork from the time of the moon landing in 1969, other Apollo missions and moon related stories.  Artists represented in the show include Giles, Trog, Garland, Jensen, Homer, Emmwood, Langdon, Gary Barker, Rowson and Dave Brown.More than 20 cartoonists and caricaturists will descend on Herne Bay for the weekend of 2nd- 4th August.  On Saturday 3rd Zoom Rockman hosts a cartoon workshop at Beach Creative and later the same day Roger Todd will run a puppet caricature workshop there.

On Sunday 4th the weekend culminates with the annual Cartooning Live event on Herne Bay Pier where the visiting artists create giant cartoons, aunt sallies and peep boards. We are promised a balloon Boris will be attacked by seagulls whilst astronaut ‘John’ Glenn (Marshall) will be attempting Herne Bay’s first moon landing on the town’s iconic pier.

With thanks to all our sponsors and supporters including Arts Council England, Canterbury City Council, British Cartoon Archive, University of Kent and the PCO.