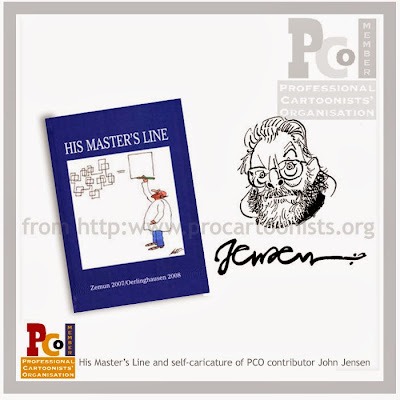 The wily old dogs of European cartooning, or at least the ones not being chased by would-be-assassins*, are on the move, as PCOer John Jensen reports.

Dieter Burkamp, organiser of the annual Zemun International Salon of Caricature, and Branko Najhold, have had a wonderful idea: why not celebrate elderly cartoonists before they pop their clogs, rather than after? All exhibitors to the show would have to be 75 or over.

As Branko’s introduction to the resulting book, His Master’s Line, succinctly puts it, all 30 cartoonists, from Western and Eastern Europe, each supplying three drawings, fairly recent, not more than ten years old, who “were at one time in the summit of European cartooning”. However, “glory is passing … and as it happens, the most famous cartoonists of their time sink slowly in oblivion.” (Some not so slowly, I can tell you). “Some of them with trembling hands and with the eyesight weakening”. Yup. But a “master always stays a master”. Yup, again.

Suitably buttered up, and as the only representative from the UK – why? Britain is filled with brilliant decrepitude – I was proud to take my place among the others to show “the new drawers” a thing or two.

The exhibition began its travels in Zemun, Serbia and, after several journeys, will wind up in Oerlinghausen, Germany during 2008.

A hardback book accompanies the show, costing about 25 Euros and Bloghorn will be publishing John’s review of the book soon. Bloghorn says click J for Jensen.

Link to the Zemun festival of Caricature.

* Check the recent entry for news on the Mohammed cartoons controversy.