How to publish a cartoon book

This month sees my publishing debut: a 112-page cartoon compilation book entitled Oddly Distracted – a collection of nearly 190 cartoons of my best published and unpublished work. The book was edited, designed, produced and published entirely by myself using a PC and Lulu.com, the world’s largest self-publishing website. 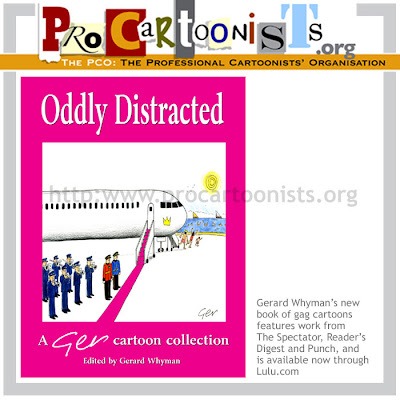 I hadn’t realised until recently that next year marks my 15th year in the cartooning business – being first published in 1994 – and so this book is a timely marker of that fact. Not that it was the prime motivator – I was inspired by seeing Tim Harries’ excellent self-published cartoon books last year and decided to have a go myself. Another factor was that Tim gave me free copies of his book with the promise that I give him one of mine when it was done. Twelve months on and I’ve managed to keep my side of the bargain.

Lulu is a “print-on-demand” service which means that books are only printed when ordered. The beauty of this system is that there is no minimum print run – you can just have one copy of book if you wish. So, with no storage costs, the process is cheap; there are no set up costs and the only investment is your time and energy. You must, however, be computer literate to be able to produce a printable book. I bought an optional distribution deal with Lulu for £79.95 which gave me an ISBN number and the availability of my book to online stores like Amazon which opens up a huge market.

The process of creating the book turned out to be a bit tricky and frustrating at times. Figuring out the software to lay out the pages was one thing – it took a while to master the Page Plus package – but using Lulu’s rather complex website was quite another. It doesn’t help if you’re like me and wade straight in without reading the small print closely. One error was to initially make the book 7.5”x 7.5” square, a size ineligible for the distribution deal I had bought with them. So I had to start from scratch and redesigned the book to a crown quarto format. 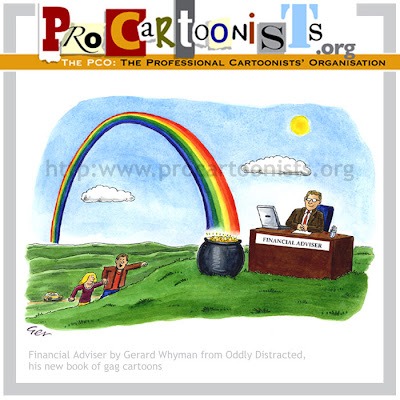 The cartoon pages are loosely themed – there are ones on couples with troubles, business, and entertainment, among many other topics. There is work that has been published in The Spectator, The Oldie and Reader’s Digest and there are several full page cartoons that were originally printed in Punch. There is also a large contingent of my favourite unpublished gags.

I’m very pleased with the way has book has finally turned out. The print quality is first class and really does justice to the original drawings. Of course, the hardest part now is to convince the buying public to part with their hard-earned cash for my product – not easy in these difficult times.

Oddly Distracted is priced £7.95. You can see a preview of Gerard’s book and order copies by clicking this link