Following on from his look at the weird and wonderful work of Fletcher Hanks, PCOer John Jensen takes another trip back to the comic books of the 1930s and 1940s with the focus on his native Australia

“The Case of the Haunted Piecrust”, “Wocko the Beaut”, “Supa-Dupa Man”, “Speed Umplestoop” and “Tripalong Hoppity” – all of these and many more funnies fell out of the wonderfully zany mind of cartoonist Emile Mercier.

Mercier was born in New Caledonia in 1901. Twenty years later, in Australia, he began his career as a freelance cartoonist. During the Second World War, the bulk of his work, the comics, appeared in an array of Frank Johnson Publications. Johnson encouraged Australian talents and his publications developed a character and liveliness which set them apart – sometimes for the better, sometimes not – from the many US imports which which were dumped in Australia, usually as ships’ ballast, during the war.

Due to wartime paper restrictions, Johnson was forced to reduce the size of some offerings: Star Pocket Comics ran for at least 14 issues, successful in spite of some issues being printed on brown wrapping paper. The same paper shortage brought forth a decree that there would be no new regular runs of comic books.

Johnson resorted to cunning to deal with the situation. His regular characters continued to appear each month but each issue bore a new title: King Comics, Amazing Comics, Gem Comics, Slick Comics, Bonzer Comics, Flash Comics and more. When imagination failed, the word “new” was tacked to an old title and the process began over again. Mercier’s work appeared in most of these issues.

Mercier was a people watcher but the people he watched, ordinary everyday Australians, were transformed into creatures of his eccentric universe. Occasionally in the background of a cartoon someone would be walking around with springs on his or her feet, or on stilts or jumping around on pogo sticks. His characters’ feet quite often sagged at a ninety-degree angle half way along the sole of the foot. Dogs, cats and boozy types abounded. Mercier’s cast list was very Australian.

I met Mercier just after the war, and I asked him for his definition of a good cartoon. “A good cartoon, sonny, is one that is accepted, published and paid for,” he said. You might argue with this definition but for me it was heart-lightening.

A few months after our meeting I took my first comic strip, “Mary Mixup, Female Spy Terrific” (by Jon J) to Frank Johnson Publications where, to my amazement it was accepted and published. My mother, who hated comics, wouldn’t have them in the house. When I took home my copy of Gem Comics No.27 with “Mary Mixup” within, Mum took it, tore it and threw it away. 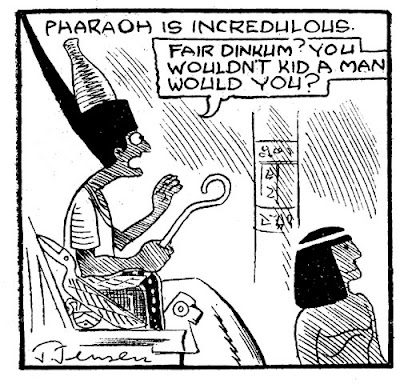 John Jensen’s “Chester Nutte” was published in Gem Comics, circa 1947

In spite of this, other titles followed, such as “Chester Nutte”, a time traveller, above, and “Snooper McDroople, Ace Newspaper Reporter”. Mercier’s drawing never influenced me but a little of his humour rubbed off. The strips improved a bit over the twelve months I worked on them and there were strips for other comics publishers too, but “Mary Mixup” was an abomination.

Johnson paid up – eventually. I think he was so traumatised by my demand that he continued to use my work, and pay for it … eventually.