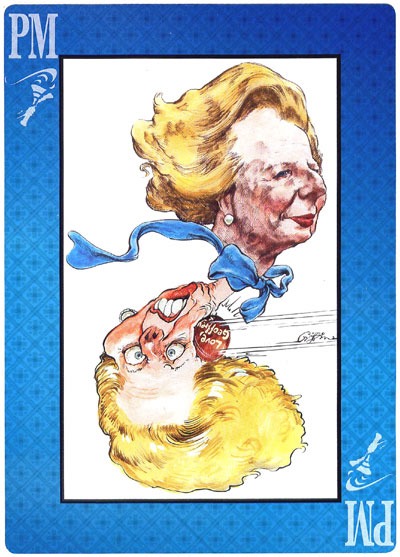 It was 30 years ago today (May 4) that Margaret Thatcher walked through the doors of 10 Downing Street as Prime Minister, quoting the words of St. Francis of Assisi. Opinion is still sharply divided on whether or not she managed to bring harmony where there was discord, or hope where there was despair.

The two contrasting views on the Iron Lady will be represented in an exhibition which opens at the Cartoon Museum in London on Wednesday (May 6) entitled Maggie! Maggie! Maggie! Margaret Thatcher – Mother of the Nation or Monster from the Blue Lagoon.

The exhibition, which runs until July 26, is guest curated by two veterans of the ideological battles of the Thatcher years: Kenneth Baker, who served in the Thatcher cabinet from 1985 until 1990, and Steve Bell, political cartoonist for The Guardian who established his reputation as a fierce satirist during the Thatcher Years. No prizes for guessing which view each curator will be taking.

The exhibition aims to show how Thatcher has been both loved and loathed by politicians, the press and the public. The selection of nearly 100 cartoons by 35 cartoonists from across the political spectrum includes works by Bell himself, Michael Cummings, Stanley Franklin, Nicholas Garland, Les Gibbard, Charles Griffin, Jak, Peter Kennard, Gerald Scarfe, Posy Simmonds and Ralph Steadman.

It chronicles her rise to power, the Falklands war, the miners’ strike, privatisation, the poll tax, Europe, her eventual downfall and her long term impact on both the Conservative and Labour parties.

A fully illustrated 100-page catalogue will be available to accompany the show, it includes contributions by the two curators, along with such diverse types as Lord Carrington, Michael Foot, Geoffrey Howe, Ken Loach, David Owen, David Steel and Norman Tebbit.

The BBC have a short preview piece available here.

And in the interests of balance, and because you probably can’t turn your computer monitor upside down … 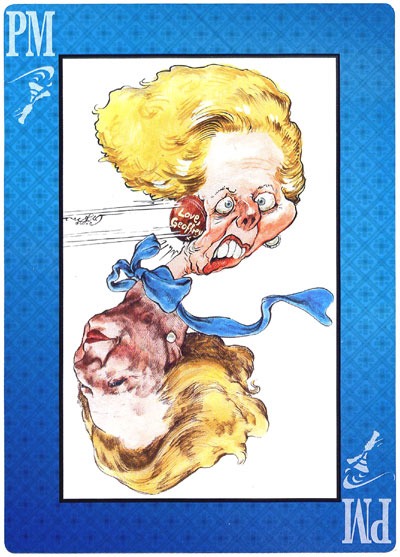