Oor Wullie under the hammer

An oil painting of iconic Scottish cartoon-strip character Oor Wullie is due to be auctioned in Glasgow on Thursday night, and has been valued at between £2,500 and £3,500. 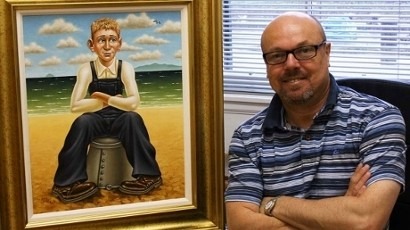 The painting, by Irvine-based artist Graham McKean, shows D.C. Thomson‘s Wullie – and his trademark upturned bucket – away from his Dundee home and sat on a sandy beach.

The character is celebrating his 75th birthday this year, having first appeared in the Sunday Post in 1936.

“I have painted many famous people over the years but I wanted to do a real Scottish icon this time, and that was when I thought of Wullie,” McKean told STV News.

“Like many Scottish youngsters, I grew up reading Oor Wullie and The Broons, although when I was deciding where to set the piece I decided to take him away from Dundee and put him in a location closer to my own home,” he added.

The auction raises the age-old question about the relative value of different art forms.

If McKean’s painting reaches its expected sale price, it will have made roughly double that of a sketchbook containing Wullie drawings by the character’s original artist, legendary Thomson cartoonist Dudley D. Watkins – which sold last year for £1,600.

Meanwhile, Wullie has been reinterpreted in a very different way in the current issue of Viz. A one-page strip titled ‘Oor Frankie’, drawn by Davey Jones, casts comedian Frankie Boyle in the role and, for a limited time, can be viewed here for free.

Bloghorn says if you would like to share a view on the value of art and cartoon, or even of cartoon and art, please do in the comments below.