PCOer Royston Robertson reviews the exhibition Pont: Observing the British at Home and Abroad at the Cartoon Museum 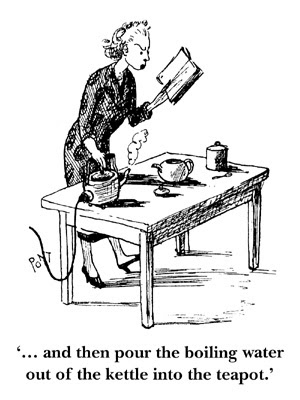 It’s probably asking for trouble to use the word “important” in relation to a cartoon exhibition, but it seems applicable here as Pont, who was known as Graham Laidler to his mum, is so often overlooked when histories of cartooning are written.

Also, these cartoons from the 1930s were clearly instrumental in helping to create the magazine cartoon as we know it today. And a tribute to their worth is the fact that so many are laugh-out-loud funny, even now.

Pont’s The British Character cartoons, which appeared in Punch and make up a large chunk of the show, still seem to hit the nail on the head. Even the captions in themselves are funny: “Fondness for laughing at our own anecdotes”; “Passion for not forgetting the moderately great”; and, my particular favourite, “A tendency to leave the washing-up till later”.

The drawings demand your attention, and repay you with lots of brilliant details. Look at that impatient left foot in the drawing above! In “Life in the Flat Above”, part of the Popular Misconceptions series, we see every member of the family jumping up and down on the floor and clanging pots, but look closer and you see that figures in the paintings on the walls, including an elephant, are also jumping. 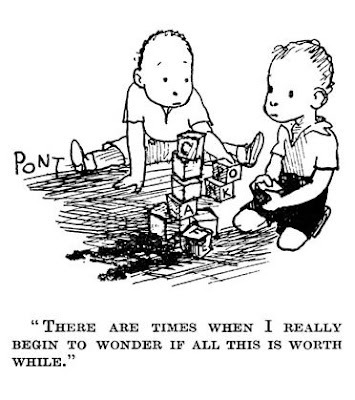 Laidler died at 32, a tragically short life, but what a groundbreaking legacy he left. The cartoon above looks like a 1930s precursor to the melancholy of Charles Schulz’s Peanuts.

So it’s an important show, but it’s mostly just very, very funny. The exhibition, which includes a comprehensive and reasonably priced catalogue, is at the Cartoon Museum until July 27. Go and see it.