The cartoonist as endurance athlete 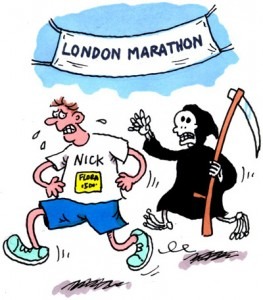 In the week when applicants for the London Marathon find out whether they have been successful in securing a place in the 2011 event, Nick Newman, cartoonist for Private Eye and the Sunday Times, tells the Bloghorn why he takes part:

I’ve always had the itch. Since living in London since the early 1980s, and seeing the first London Marathons on television, I always felt that the distance was the pinnacle of human endeavour – after all, the Greek Pheidippides died as a result of running the very first one.

At school, I was the fat boy who tried to get out of all games. The annual steeplechase – 4 miles of muddy terrain – was the source of nightmares. Running was, quite literally, a punishment.

Yet now I “enjoy” nothing more than a 6-mile run. This is, of course, a joke. It’s all hell, pain and regret – instead of warmth, comfort and breakfast. I enjoy it when it stops. So why do I do it?

Cartoonists are well primed to run long-distance. It’s lonely and introspective. Road, road, road, dog waste, road – she’s nice – road. You just have to think of something else. Russell Taylor (of Alex fame) wrote an excellent book about his own marathon experience after he ran the New York Marathon. The fact that he wrote a humorous book about it shows how it can stimulate the creative juices, as well as blisters.

My own marathon experience began with me hooking up with a friend who put me in touch with a charity (the Muscular Dystrophy Campaign) which was all too happy to take me on as a potential runner and give me a marathon place – provided I could guarantee £1,500 of sponsorship. This year I ran for the Royal National Institute for the Deaf, on a similar basis.

Still, it puts a strain on your loved ones, who weary of the decrepit, bow-legged invalid shuffling round Sainsburys after a 15-miler. Falling asleep spilling your wine down your front doesn’t help either (though, to be honest, I was doing that long before I started running seriously).

The result is a truly life-changing experience. I’ve now run two of the buggers, and I can honestly say they are the most life-affirming events I’ve ever experienced.

This is an extract from an article which is in the running for an appearance in our print magazine, Foghorn, later this year. Bloghorn thanks Nick.