Imagine the excitement which rippled through the UK-wide, nay, global membership of the PCO when we announced we would be holding another exhibition down London way. And not only was it in London but was alsoabout London! Palpable joy ensued.

I’m very pleased to say that this latest exhibition, the third in Charing Cross Library, was wonderful. Just under fifty cartoonists submitted work themed around London past, present, and imaginary, and we managed to hang 130 pieces, quite a few of which were sold to grateful visitors (10% of the proceeds from sales are going to the Mayor’s Fund for London). Other prints, books, merchandise and indulgences were flogged by our volunteer invigilators.

On the eve of the show media mover and shaker, Glenn Marshall managed to get us some very nice coverage on ITV London News which, despite starting with a link to knife crime and getting our name wrong, was an excellent ad for the event and brought in most of the punters. You can see a video of the report, starring Carol, Sarah and Jeremy here.

Thanks to all those listed above and to the others who sent their cartoons, gave their time and energy collating, framing, hanging, invigilating, advertising and de-hanging. Special thanks to Kipper Williams for his talk and to Rob Duncan for his cartooning workshop, both of which were well attended and enjoyed by Joe & Joanna Public. Further thanks to Kasia for capturing the action (above) on camera. 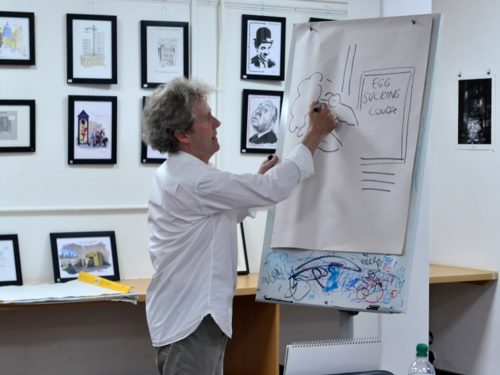 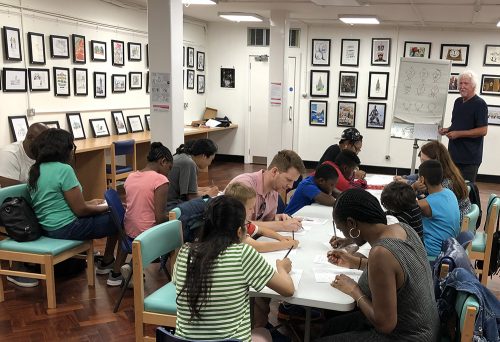