Viz in rude health after 30 years 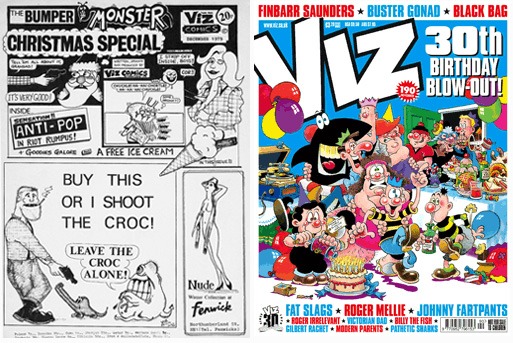 The first issue of Viz, from December 1979, and the 30th birthday issue

Viz comic is celebrating its 30th birthday with a bumper issue featuring characters old and new and a new exhibition of original artwork.

The exhibition 30 Years of Viz opens at the Cartoon Museum in London next week (November 4) and runs until January 24.

If 30 years seems like rather a long time, that probably because the comic was little known outside Newcastle and the surrounding area until 1985 when a deal with Virgin put it in the company’s megastores nationwide. Once John Brown from Virgin set up his own publishing company, taking Viz with him, its circulation rocketed and in the late 1980s and early 1990s it became a household name, shifting more than a million copies of each issue.

Over the years there has been much outrage and controversy surrounding Viz – they had to drop the word “comic” to show it’s not for kids – but things have calmed down somewhat and it is now an established part of the British cultural landscape. Circulation is now a much reduced, but still perfectly healthy, 82,000.

Viz is such a part of the establishment that they’ve been talking about it recently over at The Spectator, where, bizarrely, Sinclair McKay argues that the magazine clearly has a Conservative agenda and that David Cameron need look no further for a picture of “Broken Britain”. In the same magazine, Rod Liddle begs to differ, pointing out that Viz is essentially apolitical, taking potshots at everyone.

If the Tories really want to take Viz to their hearts, a better strategy would be to point out that in its early days it was helped on its way with a cash injection from Margaret Thatcher’s Enterprise Allowance Scheme – surely the biggest success story to come out of that scheme?

A less highbrow take on Viz can be found at The Sun, as you might expect, where they list their favourite Top Tips from the mag. Cartoonist and blogger Lew Stringer, who has drawn a new episode of the Viz classic strip Pathetic Sharks for the anniversary issue, also talks about Viz on his blog.

Meanwhile, the Viz founder Chris Donald, who bowed out ten years ago, tells Newcastle paper the Sunday Sun that he has no regrets and shows us some of his snaps from Viz’s heyday. Bloghorn recommends Donald’s book, published in 2004, Rude Kids: The Unfeasible Story of Viz.

And finally, if you missed it earlier in the year, you can still catch the Culture Show’s take on 30 years of Viz on You Tube.