We Shouldn’t Be Doing This, You Know 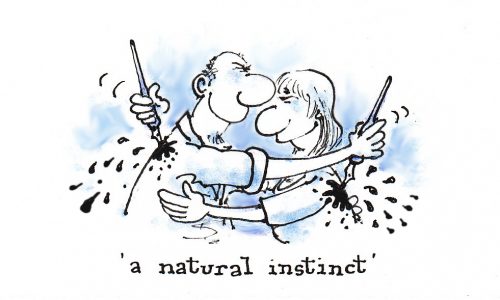 Every so often someone comes up with the idea of a cartoon competition. Trouble is, for most cartoonists, every day is competition.

Getting any cartoon into print was never a doddle. It took New Yorker regular David Sipress 25 years of submissions to get his first acceptance there. And it doesn’t get any easier.

Recent years have seen a drastic reduction in the market for cartoons of any kind – gags, strip, caricature, pocket, editorial. Certain humour publications have ceased to exist; other types of periodical have gone for saving pennies by first shrinking, then dropping, their cartoon content. Result: ever tougher competition to get into the few cartoon-friendly publications that remain. The odds on achieving success are stacked heavily against any brave soul who tries.

In such circumstances, you’d be forgiven for thinking that the natural instinct of any cartoonist on meeting another would be to plunge a sharpened 6H into the back of the other. But that tends not to happen. For one thing, cartoonists like cartoons. And so does the general public. Cartoonists enjoy each other’s work (even if the first thought is why the hell couldn’t I have thought of that?).

In business, it’s dog eats dog out there. In cartooning, it’s more like sniffing and licking. Cartoonists should be at each other’s throats. Just occasionally they are. But, more often, they team up to share tips and moans and to fight together for the survival of their art. That’s what the PCO, the Cartoonists’ Club (CCGB) and similar organisations are all about.

It is inconceivable, surely, that cartoons could die out. There’ll always be demand for the brilliant cartoons that come from those at the top of the tree. But that tree needs healthy, long roots to sustain it. Cartoons take time and money to do and, for cartooning to flourish, it has to provide a proper living. Cartoonists bring sanity and wit to a barmy world, one where vast sums can be found for charmless and bewildering artworks, while cartoons can be deemed no longer worth the paper they were once printed on.