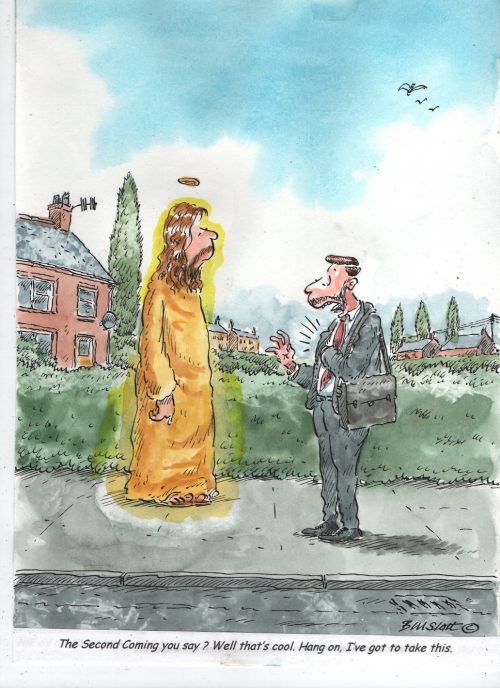 Our friend from across the pond, Jane Mattimoe of A Case for Pencils fame, turns her attention from one venerable PCO nibmeister, Ralph Steadman, to another:

Bio: Where have I been published? Well, lots of places, but increasingly in recent years, fewer. I’ve had stuff in The Times [education section] and the Telegraph and I was a regular in dear, dead Punch – a great magazine murdered by stupid publishers. Alan Coren was THE greatest editor. I do a lot of work for what are called “niche” magazines – for hobbyists really – fanatically dedicated folk who restore tractors or who build amazingly detailed railway layouts, or who restore quaint old Stationary Engines. The editors of these magazines have a sense of humour and see the editorial value of cartoons – unlike, in recent years, the editors and publishers of so-called “lifestyle” magazines. They and the often faceless wielders of power in the UK press are ditching cartoonists at an alarming rate.

PCO is very concerned about this. Its obvious that UK publishers don’t listen to each other. Ian Hislop, editor of the very successful Private Eye [I very occasionally get a gag in that] is on record saying that increasing cartoon content increases circulation. Tell that to the faceless ones at Saga Magazine which recently dropped ALL cartoons. We’re often told it’s all to do with costs. Which is accountant-speak nonsense. I think it’s to do with a humour dis-connect with journo-centric editors who’d rather fill their pages with dense fields of print and photos and who don’t know how to “read” a cartoon. I mean, there are unfortunates who don’t have a sense of humour, aren’t there ? Whoa ! This is getting way too serious so I’ll move on to……………

[2] Dip – in pen nibs and holders. Leonardt nibs are best because they are flexible enough to go from fine line to thick without wearing out too quickly. These nibs are the same as the ones I used as a child in school

60-odd years ago! WAY more expensive now though. And you’ve got to use a little brass slip-on reservoir on them.

[5] A range of watercolour brushes. 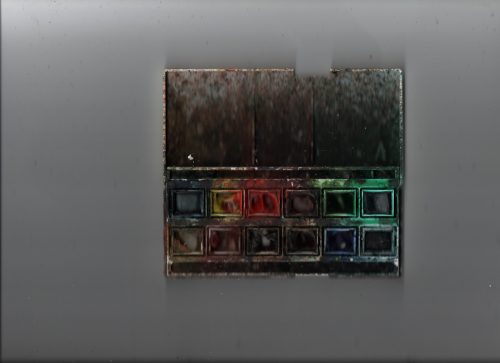 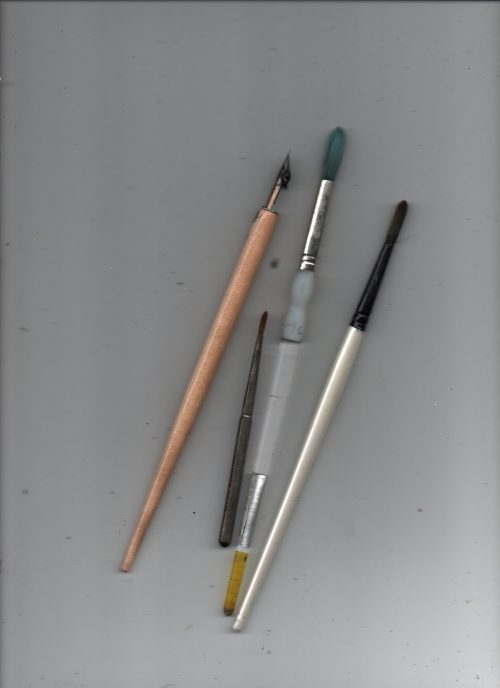 Bill used a scanner to create images of his art supplies.

Tools I wish I could use better:

All of the above.

I can’t think of any. I love the physical business of actually drawing; the sound and feel of nib on paper. I have good friends who have made the transition from that to working wholly digitally. And their product is really good, if sometimes a bit too perfect. But whilst I’ve been fascinated watching a colleague use a Cintiq, for example, it doesn’t attract me. I mean, you never get your hands dirty, do you ? Incidentally, I also paint using acrylics on canvas. I went to Art College in my youth, before spending many years teaching Art. 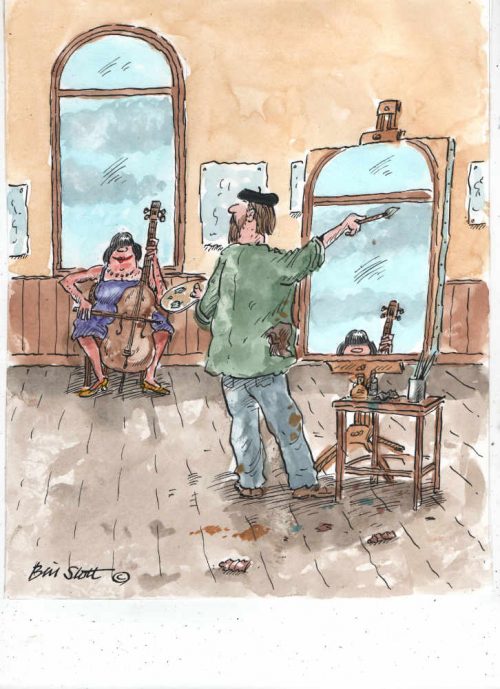 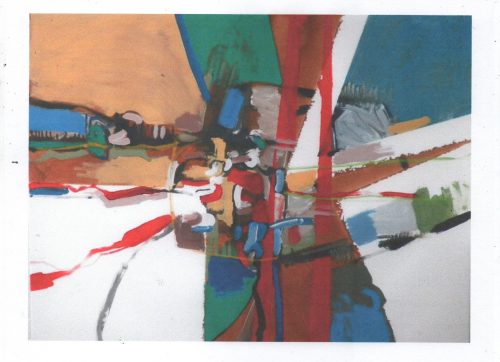 Don’t have any. All a bit conventionally boring, really.

Once I’ve had an idea, I listen to music, mostly classical, New Orleans Jazz and certain others, e.g., Joan Baez, Bob Dylan, Bruce Springsteen. My studio [studio ?- hah ha ha – it’s the back bedroom really] overlooks the garden where my chickens live. There’s a pond too and a high Leylandii hedge in which scores of house sparrows fight and argue. So when I’m trying to think up an idea, I’ll stare out there. My studio’s a mess. Well, not to me – I know where everything MIGHT be. The rest of the relatively small house is contemporary/minimally furnished and my studio drives my partner Sheila mad. But I like it. Its organic. Besides, when I totter downstairs to make coffee, everything looks pleasingly tidy and neat. 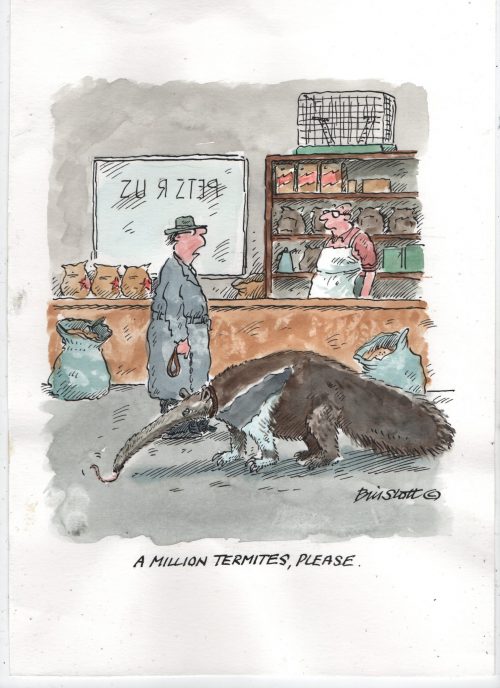 From time to time I’ll get a studio visitor called Maggie. She’s my elderly dog who pops in from time to time to see what the Human is doing. I also smoke too much. AND I have an old, environmentally-unfriendly Jaguar XK8- the most beautiful car they ever made – which still goes like stink, and a beat-up Mazda station wagon which is the dog-car.

Goes without saying that I’m very involved with the PCO. I work with what must be the best Committee in the world. The Surreal McCoy, Rupert Besley, Jeremy Banx, Steve Jones, Glenn Marshall, and Andrew Birch are the backbone of the PCO.

I could go on about family and kids [son – a lawyer, and daughter a dental hygienist -both in their 40s now] but I won’t because you must be bored silly by now. 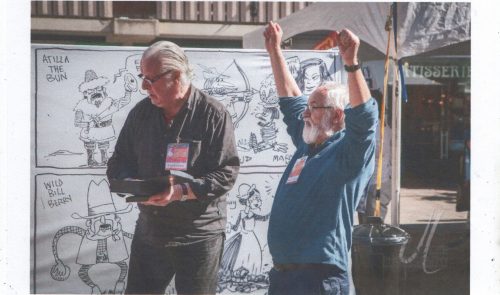 This is me – on the left – presenting an award to the organiser of the festival, Bill McCabe. PCO sponsors cartoon festivals in the UK because [a] the public love cartoons and like to see cartoonists working live, and [b] the festivals give colleagues the chance to meet up. Do publishers come to festivals, despite being invited ? No they do not, and as I’ve already said, the present attitude of UK publishers is woeful. 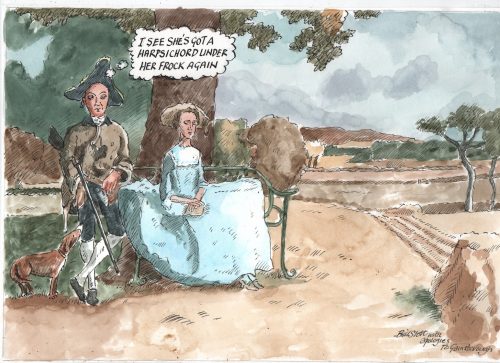 I get occasional sales through my website and my PCO portfolio and also sell a lot of prints through Albert Rusling’s Cartoon Gallery in Chester. In fact, Albert, Mike Williams and Bill Tidy taught me a lot about cartooning. I also have a lot of originals at the Chris Beetles Gallery in London. Chris’s client base is such that he can sell cartoons for a lot more money than cartoonists can currently expect from magazines. He and his son Alex are really good supporters of cartooning. 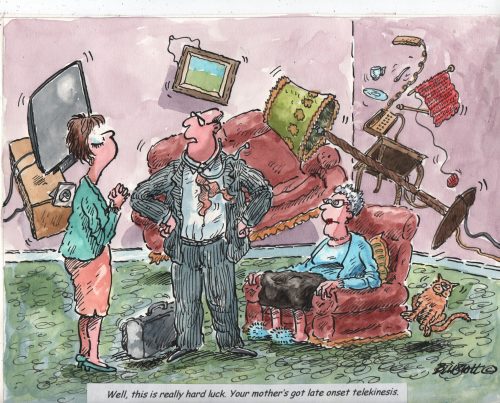