A Surreal view of the Reubens

The Surreal McCoy reports from the US of A:

To the city of steel, Pittsburgh, for the National Cartoonists Society’s Reubens awards ceremony.

Local artist Rob Rogers of the Pittsburgh Post stoked things up with a seminar on the art of the editorial cartoonist. He was followed by a session on the opportunities for e-publishing and Terri Lieberman who spoke about her Pyjama Diaries comic strip.

Then it was out to the Toonseum for a look at originals from every Reubens awards winner from the last 67 years. The show featuring artists Gary Larson, Sergio Aragones, Charles Schulz, Ronald Searle, Will Eisner and many more. It was amazing to see the original inked pages of all your cartooning heroes in one place. The evening continued next door in a wonderfully seedy bar with the traditional karaoke session and, thanks to the luridly-coloured range of cocktails on offer, there were many takers.

There were more than a few sore heads at breakfast the following day. Our lodgings were at an old hotel (old being nearly 100 years for the Americans but it’s not a patch on Shrewsbury’s Lion which hosts the eponymous annual Cartoon Festival).

The remarkably efficient annual NCS business meeting barely ruffled any braincells but the presentation of our Procartoonists tablecloth, from this year’s Shrewsbury changed all that. Many thanks to Chairleg Nathan Ariss for the idea and to all those who drew on it. It received a great deal of interest and admiring glances, and not the puzzled or bemused looks that I had anticipated, with the Dalek and a caricature of a ghoulish Maggie Thatcher providing the most comments. 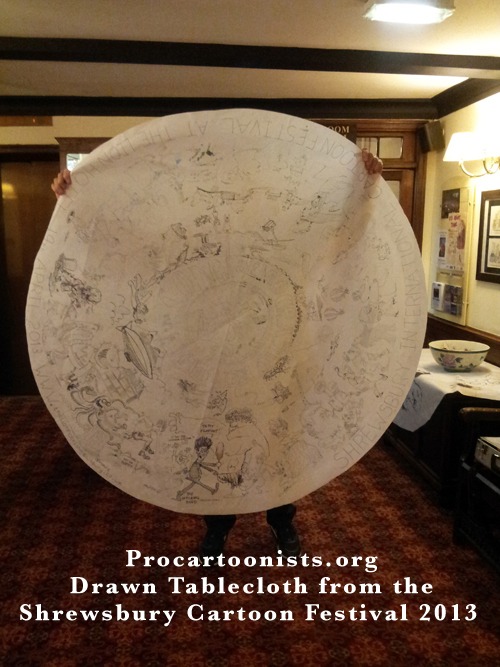 Tom Richmond (NCS President and MAD magazine editor) decided that the tablecloth must be reciprocated. So several sharpies were sourced and a linen cloth, purloined (we would say, “nicked”) from the hotel, was signed by almost all the attendees.

The linen cloth has clearly upped the ante – our tabelcloth was paper. Will we have to send silver candelabras and matching cutlery next year?

After its exhibition at next year’s Reubens weekend the Procartoonists tablecloth will be sent to the Billy Ireland Cartoon Library and Musem in Cleveland where all NCS history and valuables are archived. (This store is the match of our own archive held at the University of Kent).

The actual awards evening itself was more like the Oscars than our traditional Saturday night Shrewsbury Festival knees-up. There were cartoonists in black tie and dinner jackets, cartoonists in evening gowns, a proper sit-down dinner and a live band. A revelation was Australian cartoonist  Jason Chatfield, (he’s also attended Shrewsbury), who was hosting/singing/dancing, often doing all three at the same time. Here is the list of awards given on the night and the winners. The night continued with an after party and then an after-after party which involved some interesting ghost-busting action down disused hotel corridors.

The next day was the Pittsburgh Cartoon Arts Festival where the public could meet the cartoonists and have things signed or drawn upon. A street downtown was closed off and Betty Boop, Olive Oyl and Popeye roamed free, charming the children. A seminar on Women In Cartooning was hosted by the delightful Hilary Price (Rhymes With Orange), featuring Cathy Guisewhite (Cathy), Lynn Johnston (For Better Or For Worse) and Terri Liebenson.

Best quote of the weekend was from Hilary about how to tell the difference between male and female cartoonists – by the boob to nose ratio. Women cartoonists tend to draw big noses and small boobs.

(Opinions on male cartoonists and noses welcome in the comments – Ed).

The Sunday night’s party is by tradition themed and this year it was the Roaring Twenties. Flappers and gangsters milled in the Speakeasy bar with fake cigarette holders and boas, and the floor was soon awash with feathers and sequins. These guys certainly know how to party. Got to meet a bunch of wonderfully talented people and hang out with some of my heroes. What a great weekend. Two countries separated by a common language? Well here’s looking at making closer ties with our North American cartooning cousins. Cheers y’all!

The NCS, formed in 1946, represents over 400 professional cartoonists in North America. The Reubens, held in a different US city each year, are named after Rube Goldberg, a Pulitzer Prize-winning cartoonist and sculptor, famed for his marvellous “inventions“. Next year’s Reubens will be held in San Diego, California.

Thanks to Surreal for her report.