Cartoonists doing it for themselves 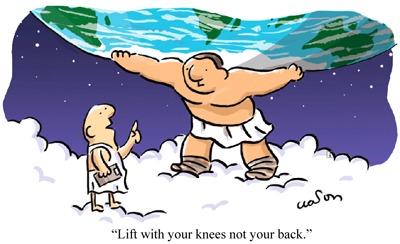 Cartoonists are continuing to use the print-on-demand services provided by various websites to get their work out there.

These sites mean that they can print collections of their drawings as and when they are needed, so they don’t end up with boxes full of unsold books cluttering up their sheds.

While the cartoonists probably won’t get rich off these books, they can work well as a “calling card” for potential clients, a kind of mini portfolio. And, crucially, they allow cartoonists to sell their books online. 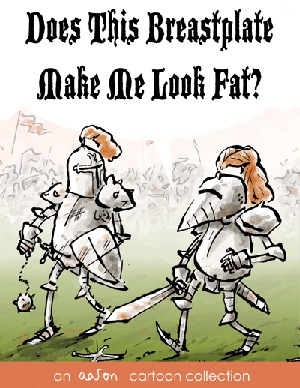 Huw Aaron is the latest to use this model, producing a book of joke cartoons published in magazines such as Private Eye, Reader’s Digest and The Oldie in 2010, plus a few unpublished cartoons. The book is called Does This Breastplate Make Me Look Fat? He has also produced a book compiling cartoons from 2009, his first as a professional cartoonist, called Gentlemen, I’m Off to Join the Circus. Bloghorn cornered Huw to ask him a few questions …

You’re relatively new to the world of cartooning, why did you decide to do not one, but two cartoon books at this stage?

My intent from the start was to produce a collection each year of my full-time cartooning career. After one year, I was already a year behind schedule. I’ve now managed to catch up.

The first book comes with a recommendation from Richard Ingrams, editor of The Oldie. Fair enough. But also … Jilly Cooper?! How did that come about?

I had a lovely phone call from Ms Cooper last year, asking to buy a cartoon of mine she’d seen in The Oldie. As my only celebrity “fan”, she was a clear choice when looking for a few words to stick on the back cover!

You seem to be trying out lots of different drawing styles, particularly in the first book. Is that deliberate or do you just go with what feels right?

I do think that an “Aaron look” is slowly emerging, but until it does, I hope there’s enough humour in these collections to make up for the mishmash of styles.

Does This Breastplate Make Me Look Fat? and Gentlemen, I’m off to Join the Circus can be purchased online at Lulu.com for £5.99 each in paperback, or £1.99 each for a digital copy.