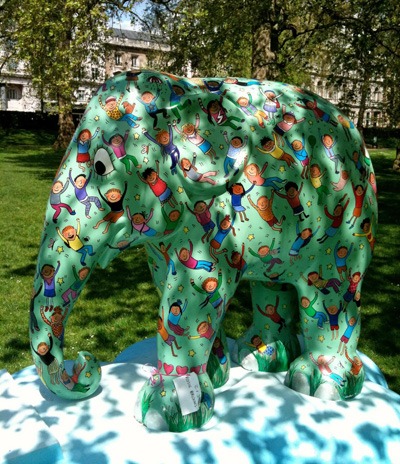 If you have visited London at all over the past few weeks, you can’t fail to have noticed all the painted elephants dotted around the city.

They are there thanks to Elephant Parade, a conservation campaign highlighting the plight of the endangered Asian elephant. More than 250 of the life-size models have been decorated by artists of all disciplines, one of them, above, by cartoonist Rosie Brooks.

Rosie, a member of the Professional Cartoonists Organisation which runs the Bloghorn, told us: “I really enjoyed this project as I was working in a studio with five other artists. It was the two weeks leading up to Christmas last year and we had our own stereo to block out the shopping centre’s jingly christmas music.”

Elefun, Rosie’s elephant, is just inside Green Park, between Green Park Tube and Hyde Park Corner Tube, roughly opposite the Atheneum Hotel. This Saturday (May 22) is Meet the Artists day. Rosie will be next to her elephant from around 10am – 2pm.

Running from May to July 2010, the parade, which is run by the charity Elephant Family, is London’s biggest outdoor art event on record. With an estimated audience of 25 million, they aim to raise £2 million for the Asian elephant and benefit 20 UK conservation charities.

All of the elephants will be sold at auction. You can bid for them online. Rosie’s is on this page: No. 213: Elefun. Mini elephants are available at branches of Selfridges or at the Elephant Parade online shop.

Rosie is no stranger to large-scale charity art projects. She worked on a similar project called Cow Parade, and she painted a model guitar for London Guitar Town. Her design was picked by Sir Paul McCartney. He liked it so much he asked her to paint a real one, which has since made an appearance in his live act. 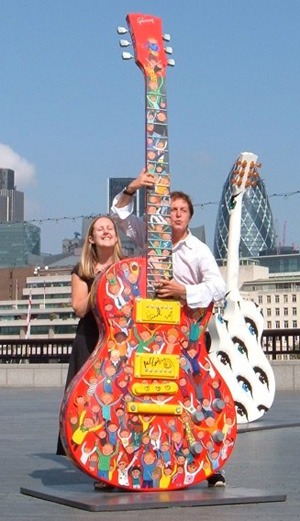