‘If Hogarth was the grandfather of the modern cartoon, You were its father…’

Gillray set the template for the modern political cartoon. His savage humour and supreme draughtsmanship making him the unrivalled visual satirist of the day. In The Plumb-Pudding in Danger he created arguably the greatest, and certainly the most pastiched, example of the form. For many contemporary political cartoonists he is a direct influence, but all cartoonists are indebted to him. 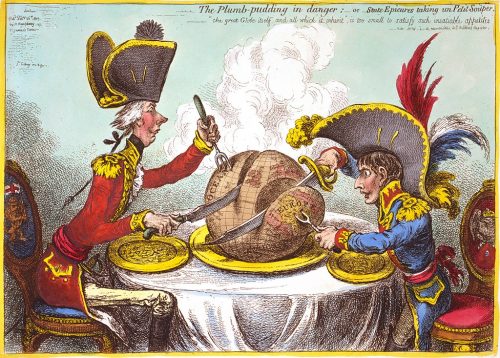 Gillray stood out from his contemporaries due to his outstanding visual inventiveness, but also the sophistication and innovation of his print making technique. His prints were known and admired by Goya and David, both artists borrowing from them in compositions of their own. One German journalist claimed Gillray was ‘the foremost living artist in the whole of Europe’, while Napoleon allegedly remarked that Gillray had contributed more to his defeat than all the armies of Europe. Yet in the first anthology of his work, published three years after his death, the editor wrote, ‘It is a scandal upon all the cold-hearted scribblers in the land to allow such a genius as Gillray to go to the grave unnoticed’. 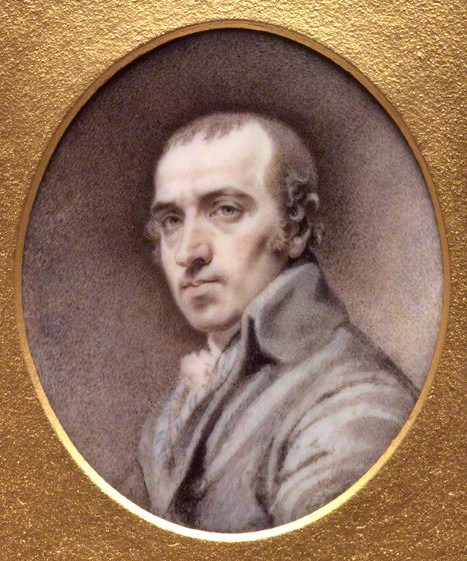 Gillray’s antecedent in satirical print making, William Hogarth, is known to us from various self-portraits, a bust ‘from the life’, a statue on the facade of the Victoria and Albert Museum and a more recent life-size bronze in Chiswick High Road. William Blake, another visionary print maker and Gillray’s fellow student at the Royal Academy schools, commands both a small bas relief in St Paul’s and a large bronze bust by Epstein in Westminster Abbey. But of Gillray we have only one verified contemporary likeness, his self-portrait miniature, painted on ivory, measuring 3” x 2 1/2”. There are no statues, no blue plaque, his only memorial is the small gravestone in the churchyard of St James’s Piccadilly, which until its recent replacement was badly worn and cracked. 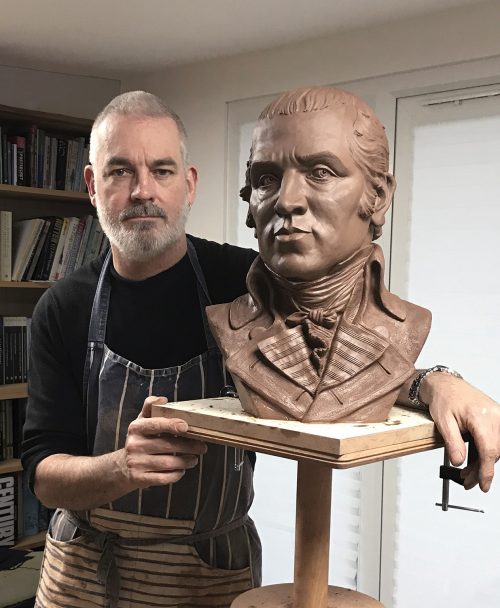 In the studio with the clay model. Photo © Kasia Kowalska

James Gillray is, in my opinion, not simply one of the greatest satirical cartoonist to have lived, but one of Britain’s greatest artists in any genre. His are the footsteps the rest of us walk in, the shoulders we stand on, the metaphors we still steal. He was, according to contemporary accounts a modest man, but even so a simple gravestone seems scarcely a sufficient memorial. It was for this reason I determined to create a new portrait bust of him.

My piece is closely modelled on his self-portrait. That portrait demonstrates that Gillray was a skilful and adept miniaturist, detailing the short fringe brushed forward to conceal a receding hairline, and the heavy brow and prominent lower lip noted in contemporary descriptions. So although the miniature also exhibits some stylistic traits common in neoclassical portraiture, we may assume that it is a reasonably true and honest likeness. 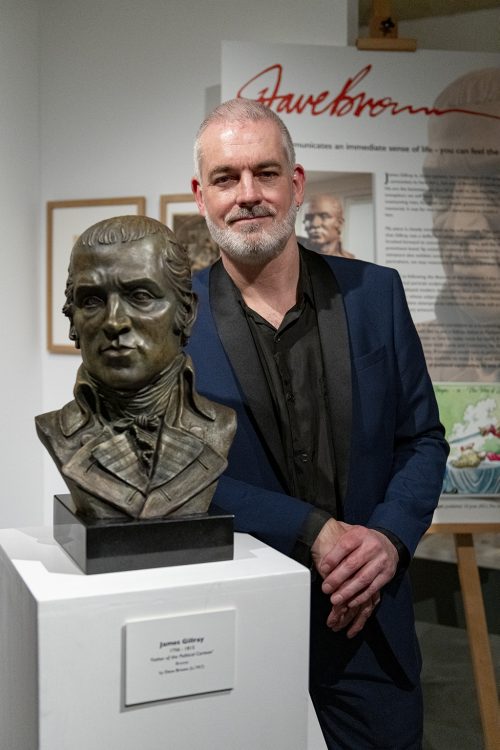 At the unveiling at the Cartoon Museum with the finished bronze. Photo © Kasia Kowalska

As well as following the likeness of the miniature, I also researched neoclassical portrait sculpture (particularly the work of Houdon, whose pieces often employed modern dress rather than pseudo-classical attire, and Nollekens, whose subjects included two of Gillray’s famous ‘victims’ Pitt and Fox), and have attempted to reference this, while still producing a contemporary artwork. 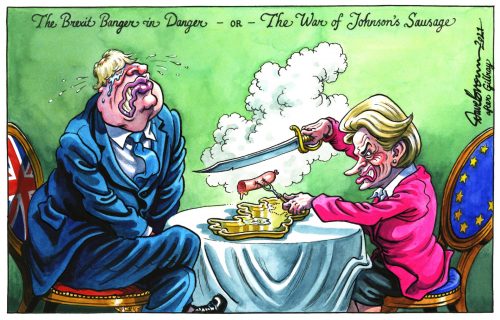 Political satire is an essential correlative to a functioning democracy, so personally I should like to see a Gillray statue in Parliament Square (we could pull down a politician or two to make room for him!). From there he could cast a critical eye over the Lords and Commons, his etching needle poised to prick their pomposity. If someone would care to petition Parliament and raise the funds I’m certainly available to make it, but until then I offer this portrait bust…the father of political cartooning by one of its bastard offspring.