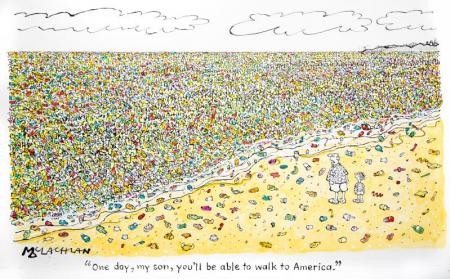 Chris Beetles Gallery presents On the Edge: The Cartoon World of Ed McLachlan

As you can see from the three cartoons presented here, Ed McLachlan can wring laughter from the darkest and bloodiest of scenarios, and the originality of his life enhancing humour is amply matched by the breathtaking brilliance of the craftsmanship he employs to deliver it.

Born in Leicester in 1940, Ed McLachlan studied at Leicester College of Art and began to contribute regularly to Punch from 1961, and to Private Eye from 1967. His cartoons – both political and gag based – have appeared in countless other publications besides, including the Sunday Mirror, Evening Standard, Daily Mirror, Sunday Telegraph, Mail on Sunday, The Oldie, The Spectator, New Statesman and Playboy. Also working as an illustrator, he has produced the ‘Simon’ series of children’s books, later animated for television. 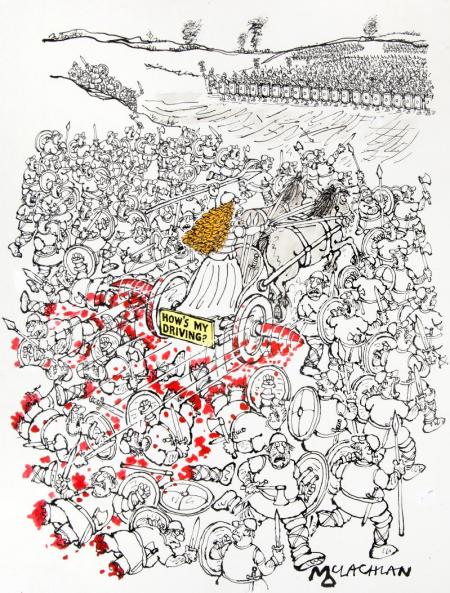 Maintaining this level of inventive excellence over such a lengthy career span requires considerable talent and perseverance, qualities which McLachlan has in abundance. He is rightly, and widely, regarded as one of our greatest living cartoonists, receiving numerous awards, including a Lifetime Achievement Award from the Cartoon Art Trust in 2011.

A selling exhibition of over 200 cartoons by one of Britain’s finest cartoonists will be preceded by a Champagne Private View, in the presence of the great man himself, on Tuesday 27th February between 6 and 8pm and officially opened by the chair of the Cartoon Museum, Oliver Preston.

The exhibition can be viewed here on the Chris Beetles Gallery website. 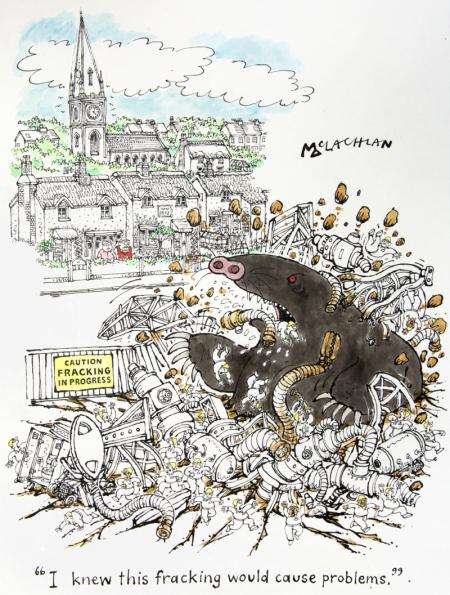