Political cartoonists – where would we be without them? 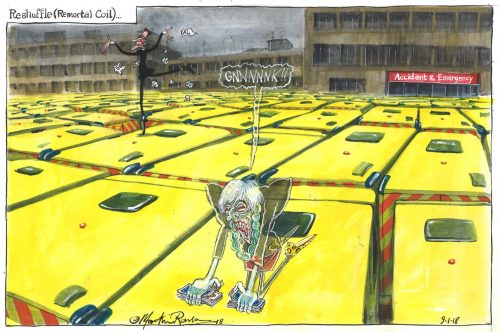 It’s now a year since power-sharing fell apart in Northern Ireland and the province was left without government. An enviable state, a cynic might say, to be spared interventions from above and the awful consequences of bad decision-making. Maybe anarchy is the best form of government…

No, of course it’s not. Not if you’re stuck on a hospital trolley or left hours waiting for an ambulance. Not if you’re jobless and homeless. Minimal government is what the well-off always want. They have no need of taxes, regulation or provisions for the needy. They’re ok, thank you.

It’s the hard-up and harried who suffer most when government stalls. Paralysis above is not the way to general improvement. Without top decisions and strategic planning, no progress can be made on things like healthcare reform, education and employment provision, all much wished for in N Ireland. This side of the Irish Sea things aren’t much better and we do have a government, of sorts. Wherever you look – two years of rail strikes, East Line fiasco, Grenfell and aftermath, hospital crises, climate change – there is a sense of inertia above and problems allowed to fester.

Some of the blame must lie with the predominance of Brexit, some with political ideology that wishes to see a rolling back of the State and to wash its hands of difficult issues. But this is not the place for party-politicking. The responsibility goes beyond one party. Where is the Opposition in all this? Why no thunderous voices? Who will speak up for those who can’t?

Two hundred years or so ago this country had in the likes of Gillray and his colleagues some of the finest cartoonists ever. Their clarity of vision, artistic genius and corruscating wit was just what the country needed. Happily, we have the same today – cartoonists of outstanding skill, with fire in their bellies and things to say.

So, rage on, Martin Rowson. More power to your elbows, Messrs Bell, Brookes, Brown (brilliant, all of them) and all the rest, too many to name. At least there’s somebody bothered.